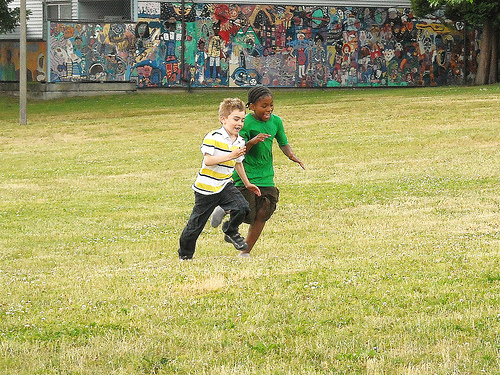 I write about lots of traditional playground games, hand-clapping games and jump rope rhymes that children play in Spanish. Recently Summer Nanny featured one of my articles in list of 20 blogs with playground games.  A few of the games mentioned in the list lend themselves particularly well to language learning and I wanted to share five of them here. Check out Summer Nanny for more outside activities – everything from classic games to ways to have fun outside with your toddler. You can probably adapt more of the games to include Spanish.

1. You’re Only Safe If
This version of tag includes lots of language. The person who is “it” says Solo estás a salvo en…(You are only safe…) and calls out an object. Then “It” tries to tag as many players as possible before they reach whatever was mentioned where they are safe. Whoever is tagged also becomes “it”. You can play this game with Spanish color words, vocabulary from the yard or playground, or with objects that you have put out just for the game. You can read a good description of  You’re Only Safe If here.

2. Foam Letter Hunt
This game is based on hiding foam letters around the yard and it would be a fun way to play with Spanish letter names and sounds. The author included reading an alphabet book as part of the activity. Read the complete description of Foam Letter Hunt here.

3. Picture This
To play this game, you take photos of objects in the yard and put them in a box. Kids draw a picture and run to that object. You can read the complete directions for Picture This here. To add Spanish to the game, make sure that when a child draws a picture they say what it is (the most natural thing to do) and that they also shout the word again when they touch the object. You can increase the options for vocabulary by putting toys and household items around the yard before you take the pictures.

4. Polo
This is a traditional British playground game and a great way to include Spanish in a fun physical activity. To play, one player is “It” and stands on one side of the yard, away from the rest of the players on the other side. “It” shouts out a category, for example, colores, animales, frutas or deportes. All the players quietly choose something in the category and one of them shouts the words back. “It” chooses one of those words and calls it back. The person whose word was chosen races to the other side of the yard and back again. “It” also races to the other side of the yard and back (they will cross paths in about the middle). Whoever gets back in place first, calls out “Polo” and is “It.” You can read the description of the playground game Polo here on Netmums Blog.

5.Red Letter
This is another traditional British playground game and a fun way to practice letters in Spanish. One player is “It” and stands at a distance from the others. She chooses a red letter – a letter that means she will chase the others when she says it – and tells the others. Then “It” calls out a letter and the players take one step toward her for each time that letter occurs in their name. The first player to reach “It” becomes “It” the next time. If “It” calls out the red letter everyone runs back to the start. If “It” catches a player before they get back to start, that player becomes “It”. Red Letter is also mentioned on Netmums Blog. яндекс

Thanks so much to Summer Nanny for a great list of blogs and games. Be sure to check out more of their recommendations!