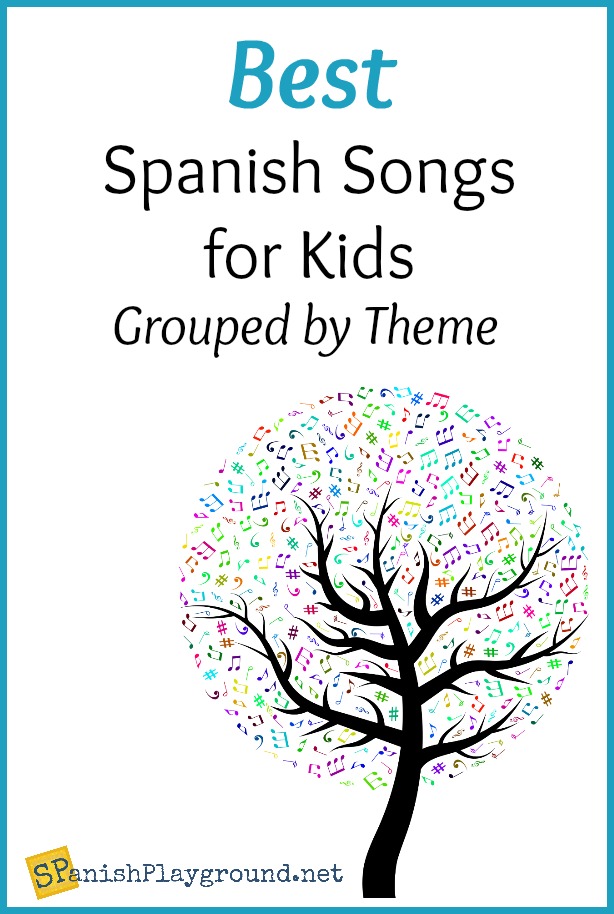 Singing, students from preschool through high school produce language they could not generate spontaneously. In other words, Spanish songs for kids give them the opportunity speak Spanish in paragraphs, for minutes at a time, rather than working out individual sentences.

Spanish songs for kids are also the best way to acquire correct pronunciation. In Spanish, the vowel sounds are essential, and songs prolong those sounds so that children can hear and produce them accurately. In addition, many words in Spanish link as the final syllable of one and the first syllable of the following word combine. Singing, children learn to pronounce these linked words correctly and then transfer that pronunciation when they speak.

Songs also teach vocabulary, structures and the culture of Spanish-speaking countries. Of course, we need to choose Spanish songs to maximize learning. Teachers and parents can make the most of Spanish songs for kids by creating comprehensible input with actions, pictures and objects.

We can also use Spanish songs for kids to introduce or reinforce a wide range of content we are learning in class. There are songs for every theme we teach in Spanish class, and music is the perfect brain break to energize students.

How to Teach with Spanish Songs for Kids

There are dozens of ways to use Spanish songs for teaching, so how you incorporate a individual song into your class will depend on the song and your students. Be sure to check out our list of 40 Ways to Use Songs to Teach Spanish.

These are the Spanish songs for kids that I have used most often in my classes over the years. Often there are several songs related to a theme, and I have included activities for many of them.

Spanish songs for kids are a big part of my preschool Spanish classes. They teach basic concepts like colors and numbers, and also help establish classroom routines. Most important, songs give students their first opportunity to produce Spanish in a low-stress way.  They learn first vocabulary and also have fun. Many of these songs can be used into the lower grades with no problem.

With these 10 Spanish color songs for kids, students learn color words and also other vocabulary. Because I teach colors in context, rather than as a separate theme, these songs are a great way to introduce and review color words efficiently.

The vowel sounds are essential to correct Spanish pronunciation. Even before I focus on all the letter sounds, I teach several songs about the vowels. These Spanish songs for kids also teach vocabulary, as each sound is represented by a word. Check out our favorite Spanish vowel songs.

I start each class with a greeting song, because it gets everyone participating. A greeting song also teaches important vocabulary without creating complicated artificial scenarios or using much class time. You can find 7 Spanish greeting songs here.

I also have a printable activity for a wonderful greeting song by Mariana Iranzi. This song does have a few English words, but it is a super fun song to sing and teaches a lot of great vocabulary. Listen to the song Hola Hello with easy Spanish words and download the free printable.

Goodbye songs are an excellent way to close a class. I have to admit that I don’t include this routine in all of my class, for a variety of reasons. However, when I do, I think it does help kids transition well to whatever comes next. Here are 5 Spanish goodbye songs I have used in class.

Clean-up songs make picking up a room much more fun and also teach several useful verbs. There are traditional clean up songs like A guardar, and also songs specifically for Spanish class. Check out these 7 Spanish clean up songs for class and home.

If you work with young children, a hand washing song is an excellent way to get them to wash long enough to actually get their hands clean. I share these Spanish songs for kids with my parents, and many say it becomes a part of their routine at home. Choose from these Spanish hand washing songs or invent your own.

Spanish vocabulary songs fit into themes centered on a related set of words. I don’t develop all my themes this way, but there is definitely some overlap between vocabulary-based themes and content-based themes.

There are lots of Spanish songs to help kids learn food vocabulary. They tend to have fun animations  and often include the verb gustar. Although a few of these Spanish songs about food focus specifically on fruits and vegetables, there are also songs with general food vocabulary and words related to mealtime. Check out these 17 Spanish food songs for kids.

Teaching children to recognize their emotions and be empathetic is important, and Spanish songs for kids make it much easier to master this important vocabulary. Songs about emotions can be combined with picture and actions to create comprehensible input. I have used these 7 Spanish feelings songs with my students.

I teach action verbs using movement songs in my first classes. These are verbs I then reinforce in stories and with other activities. All the evidence shows that movement enhances learning! You can find my favorite Spanish movement songs here.

I do not teach clothing as a separate theme. Instead, I work clothing vocabulary into seasons, activities and stories. Many of these Spanish clothing songs also teach clothing words as they related to a bigger context.

Spanish songs for kids about body parts are an easy way to learn important vocabulary, and they also get kids moving. There are dozens of body parts songs! Here are 10 Spanish body parts songs I have used with kids.

Gustar is one of the super 7 verbs in Spanish, and mastering it lets kids communicate important personal information. Because the structure of gustar is different than the English “to like,” songs are an excellent way to ingrain the correct pronouns and patterns into kids’ brains. Check out these Spanish songs with gustar to help kids learn this tricky verb.

Here in Wisconsin, winter is a big deal. So, like many teachers, I take advantage of the season to teach winter vocabulary in context. Here are 5 Spanish winter songs we like.

Mariana Iranzi also has a CD called Primavera with Spanish songs for school about spring. This CD is perfect for native speakers, but there are also songs that work for children learning Spanish.

Rain songs fit right into a spring theme, although we also sing them in the fall. Here are a few of our favorite Spanish rain songs for kids.

There are so many great chicken songs in Spanish! I have admit this is one of my favorite themes. In addition to these songs, there lovely picture books and fun activities and crafts. I guess it could also be that I like talking about chickens so much because it’s finally spring! You can find our favorite Spanish chicken songs here.

Leaves, apples, pumpkins..there is so much to love about fall! Of course, it is also a perfect time to review vocabulary related to the changing weather. Here are some of our favorite Spanish fall songs about the season and fall holidays.

Spanish Days of the Week Songs

The days of the week are vocabulary all Spanish learners master sooner or later. I don’t focus a lot on the days of the week in the lower grades because they are fairly abstract and my classes meet once or twice a week. For me, songs are the perfect way to familiarize kids with this vocabulary! These Spanish days of the week songs make it easy for kids to memorize these words.

I usually have a few students who are crazy about trains and other forms of transportation. These Spanish train songs are always a hit with those students in particular. 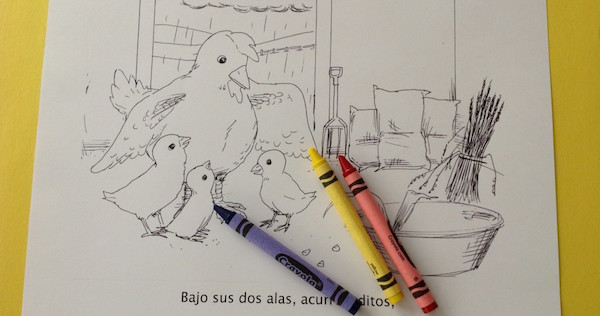 These Spanish Song Books with Built-In Music are a fabulous resource for learning Spanish. Just press a button to hear the song, and read and sing along. I love these books!

Las mañanitas is the song we sing in Mexico on birthdays, as well as Mother’s Day and other special occasions. Find a lovely version and two free printables with the lyrics: Happy Birthday Song in Spanish Las Mañanitas.

Los pollitos is one of my favorite traditional Spanish songs for kids. It teaches so much language, and the kids love the story! Check out Printable Spanish Story and Coloring Book: Los pollitos to hear the version of the song I teach and see how I use the story in the song.

For example, Veo veo, or I spy, has a catchy song that I teach my students. Learn more about the Veo veo song and activities to do with kids.

There are also lots of Spanish hand-clapping games that have songs to sing as you clap. They are wonderful Spanish learning because they combine music, movement and culture. Find 10 Spanish hand clapping games here.

Spanish learning songs are songs artists write specifically for children learning Spanish as a second language. In particular, they often fit into themes in elementary programs.

Rockalingua has songs for almost every theme. They also have videos, games, and printables to support the language in their songs. These song are an amazing resource! Read about Rockalingua Spanish vocabulary songs for elementary students here.

123 Andrés also has Spanish songs for kids, and his album Arriba abajo comes with fabulous resources for teachers and parents. Read more about songs for learning Spanish from 123 Andrés.

Like 123 Andrés, Ana Calabrese is orginally from Colombia. She has a wonderful selection of songs for preschool and elementary learners. Read more about the Short Spanish Songs from Ana Calabrese.

Spanish Songs for the Whole Family

There are several wonderful artists creating music in Spanish that appeals to the whole family. These are not Spanish learning songs specifically because some have a much wider range of vocabulary and others are songs in English and Spanish.

Check out music by Sonia de los Santos and the happy Spanish songs by Lucky Diaz.

Babies are special, and lullabies play a special role in their new worlds. Lullabies in Spanish teach the sounds of the language from birth. Listen to our favorite Spanish lullabies here.

We also suggest you check out the Latin Grammy nominations for Best Latin Children’s Album 2018. You can hear songs from each of the artists, and it is a great way to discover new Spanish songs for kids.