Spanish Games for Kids for Class and Home 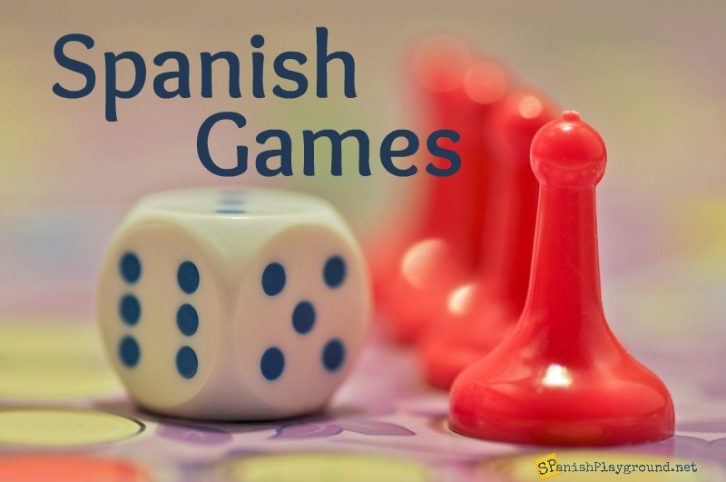 Games in Spanish are an important part of language class and learning at home. Kids love to play. After all, they are children! Below you will find our favorite Spanish games for kids, grouped by theme and type.

Many of these Spanish games for kids have picture printable cards, question cards or game boards for specific content. However, you can adapt them for different themes.

We organized our Spanish games for kids into the following categories, so you can jump ahead if you like!

We sure have fun in Spanish class, don’t we? Of course, it’s not all fun and games. Rather, the games we play in Spanish class are serious learning. So, teachers choose and create Spanish classroom games to give students exposure to the target language. In addition, we structure play so they can use Spanish in a natural context. 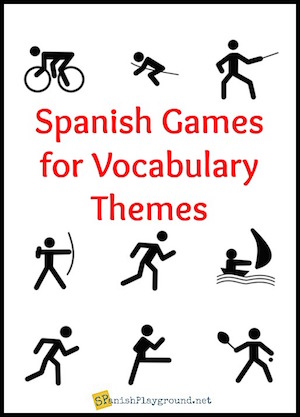 We all need fun activities to introduce and practice vocabulary. See our favorite Spanish vocabulary games organized by theme.

Verbs are essential to building communicative skills. So, include some of these Spanish verb games in your class plans.

I made this set of printable dominoes to help kids see the patterns in verbs forms. Students match a pronoun or a conjugated verb to another verb in the same person. See Spanish Verb Games: Conjugation Dominoes.

Also see Spanish Verb Practice Game of Paper Basketball, an entertaining way to get in repetition of conjugations.

Tener is one of the super seven verbs, meaning that once students master it, they can communicate a lot!

These Spanish sentence building games with tener use this important verb and lots of common vocabulary.

Also, try this printable tener expressions game. It can be used with beginners, or add questions to use it with more advanced learners.

I love games that get kids up and moving. In these large group power point games with the verb gustar, kids move to one side or the other to anwer ¿Cuál te gusta más? It’s a fun way to practice gustar and high-frequency vocabulary. See Spanish Powerpoint Games with Gustar

Asking questions is the basis of many Spanish games for kids, and it’s also important to everyday conversation. Try these Spanish question games in your class.

This is one of my favorite games! It’s a memory challenge where players look at a picture and then answer questions about it. You can find 2 free versions of the game on Spanish Playground. Each is a download with 12 detailed pictures and questions cards.

El repollo is a Spanish question game I learned from students in Nicaragua. Learn about this fun, fast-moving game at Spanish Question Game: El Repollo

I love using trivia type questions to draw on what students know to increase their Spanish comprehension and vocabulary. Try the games and cards at Spanish Trivia Questions: Printable Cards.

Information gap activities can be time consuming to make and often don’t hold the interest of students the way a game does. So, a colleague and I sat down and came up with an information gap game to play with picture cards. Read about it at Spanish Information Gap Game: Name That Card.

This is a 10- page activity book with pictures and questions. You can find it here: Spanish Question Words Practice – Dibujos Divertidos.

Board games are perfect for small group work in class or an evening at home. These are some of the Spanish board games we think work best for language learners.

Synonyms are an excellent way to grow kids’ vocabulary. Check out these Spanish synonyms for elementary students with printable synonym cards.

Spanish category games are a fabulous way to practice vocabulary. These are two of our favorite Spanish games for kids that use categories. They are great for class or to play at home.

I made a printable Name 3 Things Spanish vocabulary game with categories with language learners in mind. The categories consider words kids learn in Spanish class.

Basta is a Spanish category game played in dozens of countries. I made printable boards with categories for Spanish language learners: Basta Game for Spanish Vocabulary Practice

Spanish listening games are a fun way build this important language skill and also review vocabulary. Check out 5 Spanish Listening Games, and picture cards you can use to play 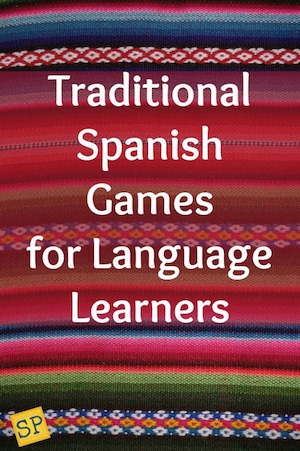 OnlineFreeSpanish also has a large selection of online Spanish games. For example, this Online Spanish Game: Letters and Vocabulary is good for beginners. In addition, they have games to focus grammar points like this Spanish Online Activity for Kids: Practicing Gender with OnlineFreeSpanish.

There are also many online Spanish games for native speakers that kids learning language can play.

For example, this Spanish online game, Un día en el circo, is from a set of activities called Diverland, and it works well for practicing prepositions and position words.

Also, read about two websites with online Spanish games to learn shapes and other basic concepts.

You may want to tap into Spanish learning apps for language learners. Here are a few I have tried.

iPad Apps for Kids Learning Spanish: Gus on the Go

Of course, there are lots of traditional children’s games that involve movement and language that you can adapt to any language.

Many of the games above can be adapted for preschool, but there are activities that are especially age appropriate.

Little ones love hiding games. They learn ¿Dónde está? and vocabulary from searching or guessing where something is. For example, try Paper Cup for Hiding or ¿Dónde está el pájaro?  with preschoolers.

Be sure to read 10 Favorite Spanish Preschool Activities. After all, everything is a game with preschoolers!

Learning a language does not have to be boring or frustrating. In fact, the best learning happens in context, and when children are having fun. Spanish games for kids are an important part of using language naturally and enjoying the process of acquiring a second language.