Reciting Poetry in Spanish and a Poem by Federico García Lorca 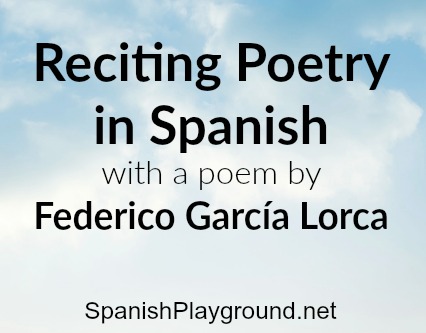 Spanish poems are a wonderful way to share culture and language with language learners. Spanish-speaking countries have a rich tradition of reciting poetry (declamar un poema or una declamación).

Be sure to check out our poetry resource page Spanish Poems for Kids.  It has more poems for children and information about sharing them with language learners.

Many children learn to recite poems from the time they are very young, and there are contests for all age groups.  Reciting poetry in Spanish teaches vocabulary, pronunciation, expression, and instills an appreciation of language. There are wonderful videos of children, and adults, reciting poetry in Spanish online. Searching declamación de poemas on YouTube produces thousands of results.  Here are two examples:

Reciting poetry in Spanish can introduce children to some of the great writers of the Spanish language.  Federico García Lorca, the Spanish poet and playwright, wrote a number of poems that are often taught to children. One of the simplest is Canción tonta (Foolish Song) and it has also been put to music by various artists. This is a good poem to read to children, and for them to memorize.  It is short, has familiar verbs, and expresses the close relationship between a child and his mother.  Also, it can be read as a poem for two voices.

I have included links to the poem being read aloud on the website Palabra Virutal, and also to a version of the poem set to music.  The translation provided here is by Martin Sorrell. The works of García Lorca are in the public domain.