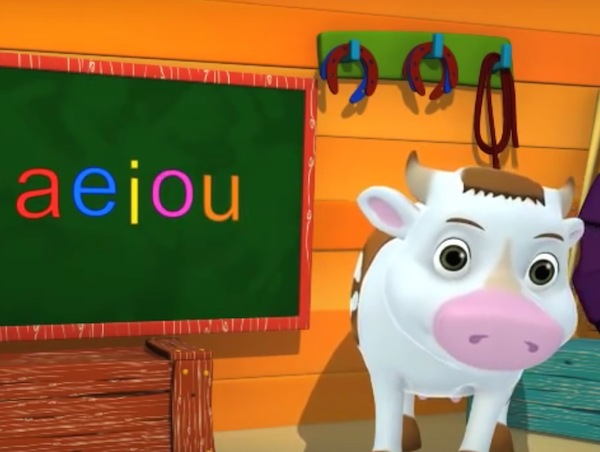 This vowel song and video are perfect for introducing kids to the Spanish vowels. They are by Atiempo Preescolar, a channel from Chile dedicated to preschool programming.

The song and video are effective for learning the Spanish vowels because:

– The video is short. It is just over a minute.

– The video provides a context for the song. It is set in a classroom and the students sing the song.

– The song uses the words las vocales and a common verb (aprendes), rather than just listing the vowels: A, e, i.  A, e, i, o, u. Las vocales aprendes tú.

– The Spanish vowels appear on the screen as they sing.

– The tempo of the song is perfect for singing along.

– The Spanish vowels are linked to familiar vocabulary.

– The video has an appropriate amount of additional natural language with familiar vocabulary:

Use these printable cards to practice the Spanish vowels and vocabulary. The printable includes cards for the words in the video and for other words that begin with the vowels.

– Use the 5 words in the video and match them to the correct vowels. There are upper and lower case vowels on the printable.

– Put out two cards that start with the same vowel and one that starts with another vowel. Say them together and let your child find the one that does not belong.

– Play a guessing game. Put out several cards and then describe one. Begin by saying the letter the words begin with: Empieza con la letra A. Le gustan las flores. Vuela.

– Sort the cards by vowel sound.