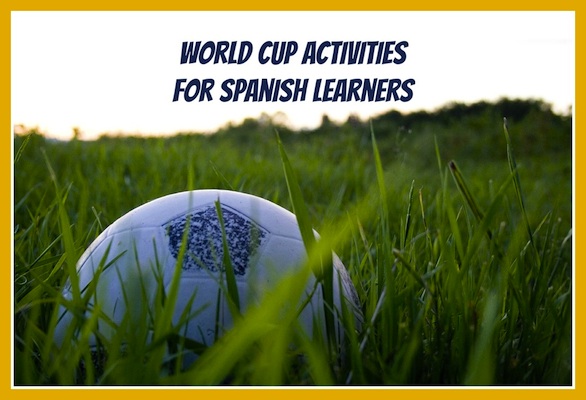 This great World Cup Activity Pack from Multicultural Kid Blogs is in English, but there are many ways to use the activities with Spanish learners. Many Spanish-speaking countries qualify to compete, and teachers and parents can connect the games and the language in a variety of ways.  Of course, the World Cup is also an wonderful opportunity to explore other countries and cultures.

Making an event as huge as the World Cup accessible and meaningful for kids can be a lot of work.

I am thrilled that Multicultural Kid Blogs has put together this great printable activity pack. It gives kids a sense of the scope of the event, while also giving them specific information about the participating countries.

The packet has World Cup activities for kids pre-K- 1st grade and also for 2nd-4th grade. There are matching games, color-by-number, word search, scrambled words, flag coloring, a map for locating and labeling countries and other activities. There are also hexagon-shaped mini-books for all 32 of the participating countries with information about the country and the team. 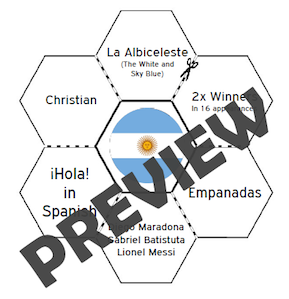 The World Soccer Cup Activity Pack is available to purchase on the Multicultural Kid Blogs website. The activity pack is in English, however, you can also use these activities to speak Spanish with kids and introduce or reinforce common vocabulary and structures.

Learn language vocabulary in Spanish. Each of the books tells kids how to say hello in the official language (or languages) of the country. Add the Spanish word for the language and teach the phrase En (idioma) se dice… En frances, se dice “bonjour”.

Learn the names of major religions and talk about religious diversity. In the mini-books, the World Cup countries are identified with the majority religion. This is an excellent opportunity to learn the words for world religions. It is also a chance to discuss how in many countries a wide variety of religions are practiced.

Talk about numbers. Use the Best Result page of the mini-book to practice numbers in Spanish. Talking about when teams will play is also good way to practice days of the week , numbers and dates. Here is the World Cup schedule in Spanish.

Practice pronunciation by saying the names of the players from Spanish-speaking countries. Each of the books has three famous players listed. You can make this really fun by saying them like an announcer.

You may want to watch and listen to a few clips of goals online. For example:
Gol por Rolando Fonseca (Costa Rica)
Gol por Diego Maradona (This clip has Spanish subtitles for the Spanish audio. It is the famous broadcaster Victor Hugo Morales calling one of Maradona’s most famous goals.)
As you watch World Cup games of Spanish-speaking countries, practice saying the names of the players.

Use the typical food in the mini-book to learn about foods of different Spanish-speaking countries and practice vocabulary. Search images for the food listed in the book. Practice food words by guessing the ingredients from the picture. Then look for a recipe for the dish to see if you guessed right. If something looks good to you, try making it!