In English, we associate learning vowel sounds with learning to read. However, children who are learning Spanish should learn the vowel sounds early and practice them often, focusing on the sound, not the association with the written letter. The vowel sounds are important for pronunciation first, and for reading later. It is never too early for children to learn to pronounce the Spanish vowels correctly!

The vowel sounds in Spanish are always the same. The accents in different parts of the Spanish-speaking world are due to different consonant sounds, different rhythms, and the omission of certain consonants, but the pronunciation of the vowels is consistent worldwide. The most important aspect of pronunciation to focus on when teaching Spanish to children is the sound of the vowels.

I was thrilled to find A, E, I, O, U, a vowel song that Carolina Gómez, Spanish teacher and founder of 123 Spanish Together and Fun for Spanish Teachers, makes available on YouTube.  It can be used with pre-readers and also with children who already know their letters. For those of you who have a background in music, the song may remind you of a vocal warm-up, but with one essential feature – a native Spanish speaker is singing. The simple structure lets you adapt the song to different activities and the repetition makes it an extremely effective learning tool.  You can listen to the whole Spanish vowel song on the 123 Spanish Together YouTube channel, and it is available on the CD Fun in Spanish. 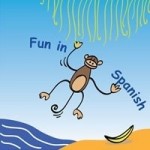 Here are a few suggestions for using the song A, E, I, O, U. At the end of the post is a list of words for each vowel sound to help you find pictures to use for the activities.

These activities take advantage of the rhythm of the song to make it fun and encourage children to sing it often. Some of them involve associating the vowel sound with the image of a word that has the same initial sound, but they do not use written letters in association with the sounds, so children do not have to know the alphabet.

Choose one object to represent each sound – things that begin with each of the five vowels. See the list below for suggestions. Draw or cut out pictures of the objects.  Each child should have a set of five pictures, one for each sound.  Glue the pictures to circles of poster board, or cardboard to make them stronger. Before you begin, pronounce the words together. Then, as you sing the song try one of these activities:

Assemble several pictures of objects that begin with the different vowel sounds.

If children are learning to read or already reading in Spanish, then associating the vowel sounds with the letters is appropriate. It is important to reinforce correct pronunciation of the letters in Spanish.  You can do the activities with images and letters, or just the letters, as you sing A, E, I, O, U.