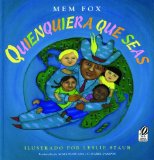 If you read your children picture books that have been translated from English to Spanish, you have probably had moments when you were disappointed by a translation or felt that the experience they were getting was somehow not as rich or authentic as it would have been in English. In the case of Quienquiera que seas, the opposite is true. The Spanish translation is better than the original English, and the English is great. I was going to include these rather academic observations in the last post about this lovely book, but decided this was a separate topic. You have been warned – the rest of this post is about the miracle of translation and the power of the subjunctive mood in Spanish.

This picture book is a perfect example of how a translation can convey the intent of a text more effectively than the original. This may seem counter intuitive or even ridiculous. After all, the text is the original words. That is true, but a work is also ideas and the way that ideas and language work together. In Quienquiera que seas the structure of Spanish and the skill of the translator combine to communicate the essential idea of the book with more depth than was possible in English.

The central theme of the book is universality, the undefined people and places that may be different in some ways, but share the most basic human experiences. The subjunctive mood is central to Quienquiera que seas in Spanish. It encompasses the mass of humanity, and speculates about their individual lives: El color de su piel puede que sea diferente al tuyo y que sus casas sean diferentes que la tuya. This powerful mood (the subjunctive is a mood, not a tense) is a part of everyday conversation in Spanish and a defining aspect of the language.

In English, the author Mem Fox works with what English has available to speculate about the lives of people around the world. She uses may –  their skin may be different than yours and their homes may be different than yours. May conveys the same idea of the unknowable, but is much less common than the subjunctive mood in Spanish. So much less common that instead of Whoever you may be, she chose Whoever you are as the title and part of the refrain, giving up much of the indefinite, encompassing feeling for a more conversational tone. It is, after all, a book for young children. As translators, Alma Flor Ada and F. Isabel Campoy did not have to make that compromise. They use quienquiera que seas. The subjunctive in Spanish after quienquiera and dondequiera emphasizes the universality that is the heart of this book yet it is completely conversational and natural to use in this story for children.

Whoever you are concludes with the message that people are the same and expresses the idea in the most concrete language possible, in English and Spanish. Smiles are the same and hearts are the same / Las sonrisas son las mismas y los corazones son iguales. The central message of the book is a contrast – that in spite of the possible differences, people are the same. In Spanish, that contrast, hypothetical vs reality, is embodied in the language at the most basic level. The shift from the subjunctive sean to the indicative son is clear and clean. The shift is there in English too, but more subtly, without the power of contrast that common usage gives the Spanish verbs.

There you go. Information that has little to do with anything practical, but notes the beauty of Spanish and points out that by reading some books in translation your children actually come out ahead.