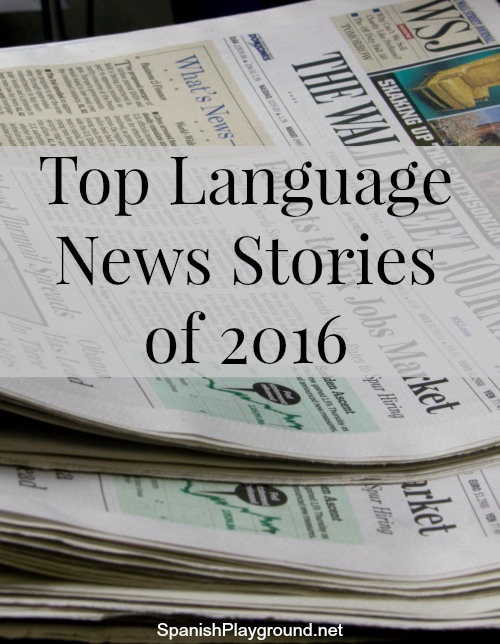 In spite of the divisiveness that dominates much of the news, there is remarkable consensus on the benefits of speaking more than one language. The press brings us stories on new research supporting the benefits of bilingualism. There are also reports on the push for bilingual education and support from parents for dual language programs in the United States. In addition, we read technology and sports news that speaks to the growing influence of Spanish speakers in the country.

Several articles gave overviews of the developing understanding of the cognitive benefits of being bilingual. In the story 6 Potential Brain Benefits Of Bilingual Education, NPR asked experts about recent research and compiled their responses. In addition to enumerating the advantages, the article noted that all the researchers strongly advocated for dual-language classrooms.

Mosaic also looked at the evolving research on the benefits of speaking more than one language in Why Being Bilingual Helps Keeps Your Brain Fit. This article was picked up by The Guardian and The New Republic, reaching a large audience with the latest evidence to support learning multiple languages.

Robert Lane Green coupled recent research with his personal perspective in Bringing Up Babel in 1843, The Economist’s bi-monthly magazine of culture and lifestyle. He is raising his sons speaking Danish and English. The article includes many examples drawn from the author’s experience and is an entertaining, informative look at parenting bilingual children.

The top language news stories of the year also brought us recent research on specific aspects of bilingualism. Quartz reported that being bilingual rewires the fundamental structure of your brain. The article points to the cognitive control of bilinguals and their ability to hold two languages in their head and switch between them.

The New York Times brought us an article on The Superior Social Skills of Bilinguals, and several sources reported on a new study from the University of Washington that points to bilingual children being smarter than their monolingual peers. There is also evidence that bilingual babies are more sensitive to music pitch than children with one language, according to an article published in The Conversation.

A number of the top language news articles of the year called for support of bilingual education and dual language programs. This was in part because Proposition 58, a measure to expand bilingual education, was on the ballot in California in November.

The Atlantic’s The New Bilingualism reports that the number of dual-language programs in American high schools is on the rise and that these programs have growing support from a diverse coalition. Author Hector Tobar is one of those supporters, and his  Op-Ed in the New York Times, The Spanish Lesson I Never Got at School, is an eloquent testimony to the power of speaking the language of immigrant ancestors.

In addition, there were articles on the newly issued policy statement from the U.S. Departments of Education and Health urging coordinated support to address the needs of preschool-aged English-language learners. The brief cites home languages as an asset to be valued, and points to research showing that supporting bilingualism from early ages can have wide-ranging benefits.

Voters in California made it clear they agree with supporting bilingual education as they passed Proposition 58 in November and officially ended the era of English-only instruction in public schools. In Bilingual Education Returns To California. Now What?, NPR looked at the challenges the state now faces in implementing bilingual programs, including the possibility of a shortage of qualified teachers.

The year also brought a number of stories that might seem less significant, but which reflect the growing presence and influence of Spanish in the U.S. These stories ranged from tech news to to sports stories and serve as a telling backdrop to the political discussions that dominated much of the year.

For example, when word of the new multilingual texting feature in iOS 10 hit the press, millions of us texting in English and Spanish cheered.

In sports, Major League Baseball brought us the #Ponleacento campaign, a fabulous movement to spell players’ names correctly in Spanish, by including written accents. MLB even added an accent to the MLB logo to make their point. See the MLB opening day spot below.

In contrast to many stories, 2016 language news brought us information and perspective that spoke to the awareness of the value of multiculturalism and multilingualism. Let’s hope that awareness continues into and beyond 2017!