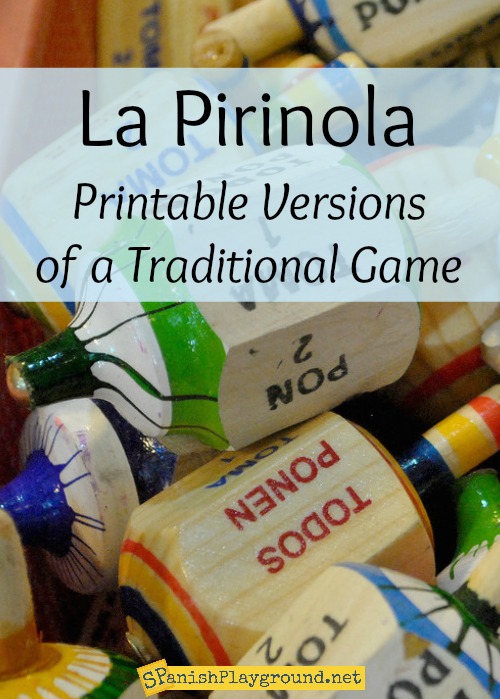 The toma todo game is hands-on learning that engages children with Spanish. Kids take turns spinning the pirinola, a wooden top with instructions on each side. As they play, they read and say simple sentences with the verbs pon, toma, and ponen. The focused language, repetition, and cultural component make this an excellent game for Spanish learners.

Children and adults play with the pirinola, or perinola throughout Latin America. The toy is a spinning top with a history dating back to ancient Rome. Very similar to the dreidel, the traditional wood pirinola is a “put and take” game.

I get wooden tops in Mexico, but they are available in many Latino markets in the U.S. too. You can also purchase plastic tops or make your own out of card stock. There is a link to a pattern for a printable pirinola below, as well as a toma todo spinner.

You can also order pirinolas from Amazon. 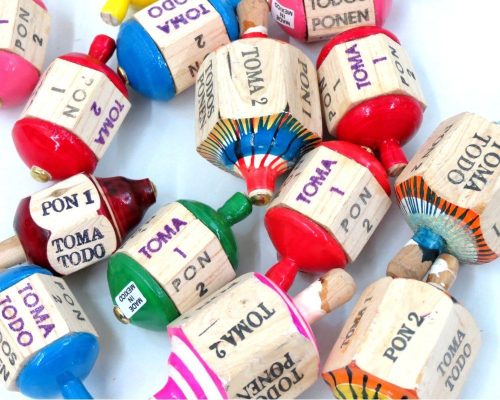 How to Play Toma Todo Game with a Pirinola

The toma todo game can be played with two or more players. Each player needs about ten tokens. We use beans, and children sometimes play with candy, but any small object will work.

Everyone puts one token into the center to start, Then one player spins the pirinola. When the top falls, she follows the instructions on the side facing up.

These are the traditional instructions in the pirinola:

Todos ponen. – Everyone puts a token in the pile.

When toma todo comes up, in order to continue, everyone must put one token in the pile. Play continues until one person has all the tokens.

How to Make a Pirinola

You can also make a pirinola out of cardboard and a pencil using this printable toma todo game. You can cut the pattern down to a smaller size and use a shorter pencil if you like. 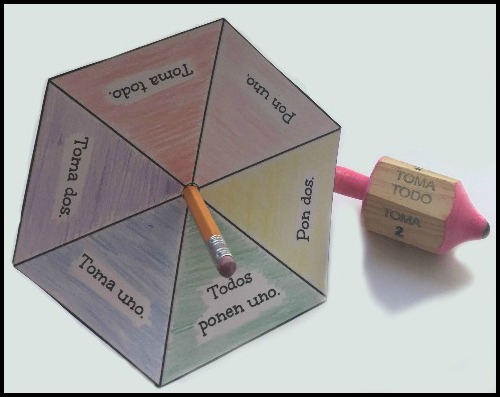 There are more printable six-sided tops online, and you can write on the pirinola phrases. I like the patterns by for spinning paper tops from AHC Arts and Crafts. Scroll down their page for black and white and color templates with instructions. They have lots of other fun paper toys on that page too.

Another way to play the toma todo game is with a toma todo spinner. This is not the traditional toy, but the spinner does familiarize kids with the game and language. It is an economical option if you have a large class.

This is my printable toma todo spinner. The PDF has two black and white spinners, so kids can color the sections different colors. Color pencil works well so they can still read the words.