A (not) Scary Halloween Story for Kids Learning Spanish 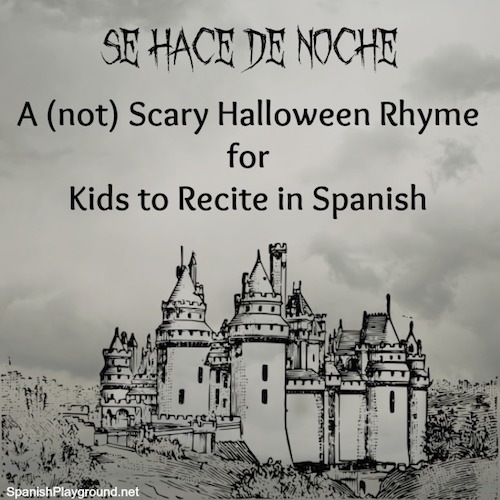 Se hace de noche is a traditional rhyme in Spanish that tells the story of a vampire, or a witch in some versions. This Spanish joke does not really have anything to do with Halloween originally, but it fits in well with other Halloween vocabulary. The story starts out sounding spooky and the suspense builds. Then there is a silly, harmless ending that makes children laugh. It is really a joke, and kids love it.

This is a Spanish joke that children can learn to tell. The vocabulary is basic, and they can learn actions that reinforce the meaning of the words. It is short and they have fun learning it and telling it with spooky voices.

This is the most common version. Luis Pescetti performs this version wonderfully, and with an echo, so that kids can practice with him. You can hear him tell the (not) scary story in Spanish on his website. Luis Pescetti is a master of Spanish jokes for children!

Here are the words to that traditional version and a translation:

There are other versions, like this one about a witch. This version has even more common vocabulary, but there is really no rhyme scheme.