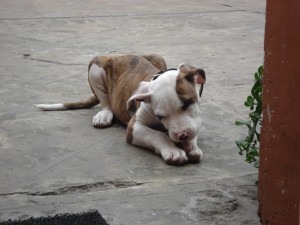 My daughter's dog, Paco, when he was a puppy. ¡Qué bonito!

Talking to your dog or cat in Spanish when your children are listening is a good way to expose children to more of the language. We tend to use a limited vocabulary with animals, so children will hear the same phrases repeated in a context that makes their meaning clear.

Of course, the idea is not to confuse your pets!  Dogs often respond to our tone of voice and visual clues, so in some circumstances using Spanish is not a problem.  For example, saying buen perro (good dog) with the same affection and enthusiasm that you say “good dog” will probably be interpreted the same way. The same is true of saying ¿Quieres salir? (Do you want to go out?) while you are holding the leash.

If you are giving your dog a direct command, be sure to accompany the Spanish command with the English that your dog understands. Learning Spanish is important, but consider your dog’s personality and what is best for the four-legged members of your family too.

Here are some common phrases to use with dogs. A few of them are things we say to cats, too.