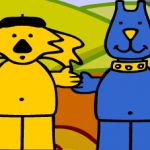 This make-your-own online puppet show is a great way to get kids speaking Spanish or any language. Start by choosing scenery and characters. Then you can move the characters around and have them talk to each other. They automatically turn toward each other, and you can move them below the level of the stage. There are four scenes to choose from and four pairs of characters.

This activity is on UpToTen – one of the best kid sites in English and French (it is completely bilingual). If you have little ones or your kids are learning French, you are probably familiar with UpToTen and the clever stories, games and songs. Lots of the activities can be used with Spanish language learners, too.

Many of the suggestions below appy to playing with any puppets or toy figures. The advantage of the online puppet show is that children do not have to worry about holding and moving the characters, and they can watch the show as they make the figures talk.

Link to Spanish speaking activity: Make your own puppet show

Even a very short, simple conversation in Spanish is great practice for kids. Here are a few suggestions to get beginning learners speaking Spanish with the puppet show:

– Kids learning Spanish have a limited vocabulary, so it is easier to make the characters talk if you establish a situation first. Decide before you start, saying for example, “Claudia just moved into the neighborhood and she is introducing herself to everyone,” or, “Max is looking for his dog.”

– Give the puppet show a name that sums up the situation. For the examples above, Me llamo Claudia and ¿Donde está mi perro? are good titles because they are sentences you will say as you play.

– Base the show on one or two repeated phrases. Use the same pattern for the whole puppet show. For the examples above you could say:

– No veo mi perro. ¿Dónde está mi perro?
– No sé. Lo siento. (Then Max moves to the next character to ask where his dog is.)

– Use four characters (the maximum the program allows) so that one character can say the same thing to three others.

– Have an ending to your puppet show. It can be very simple. For the examples above, Claudia can say ¡Adios amigos! Max can say ¡Veo mi perro! or just ¡Mi perro!

– Use different voices if you are speaking for more than one character. This makes simple conversations more interesting.

– Sing call and response songs with the characters, like a Spanish greeting song, or Te quiero.

– The scenery in this puppet show is basic, but there are things to talk about. Use simple sentences with verbs like Veo /¿Ves? (I see / Do you see?) and hay (there is, there are). Here are a few suggestions for using the scenery:

In the fall scene, a character can count the leaves: Me gusta contar. ¿Cuántas hojas hay? (I like to count. How many leaves are there?)

In the castle scene, they can count the windows on the castle (there are lots!): Me gusta contar. ¿Cuántas ventanas hay? (I like to count. How many windows are there?)

In the house scene, there are colored flowers on the wall and other colors in the room. A character can say: Me gustan los colores. Veo verde. Veo azul. (I like colors. I see green. I see blue.)

Practice your puppet show and present it for family and friends. If your child has fun with one show and wants to do it over and over, that is great. Repetition is important. Have fun!