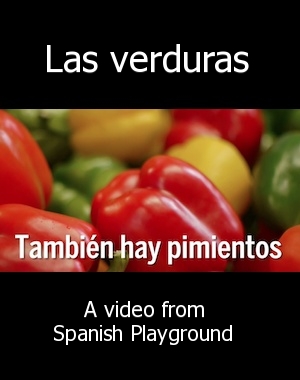 Las verduras is a video in the Spanish Words Kids Love series from Spanish Playground. These short videos teach essential Spanish words in the context of full sentences and are supported by beautiful images of Mexico. In addition to language, they expose children to essential elements of Mexican culture. See the other videos, print picture cards and read more about Spanish Words Kids Love in these posts: Las frutas,  Los juguetes del mercado, ¿Qué tiene?.

Las verduras teaches the verb form hay and vegetable words. Below the video you will find vocabulary, notes on culture, activity suggestions and printable picture cards for games.

Culture and Language Notes
Food vocabulary in Spanish varies greatly, even within Mexico. The video provides an opportunity to talk about that variation. For example, the words for tomato and tomatillo are different in different parts of the Mexico. The awareness of the variation is more important than the specific word you choose to teach.

– el mercado – The video was filmed at the Mercado Hidalgo in the city of Guanajuato. There are many excellent images of this famous market online.
– el elote – Elote is corn on the cob in Mexico. Corn that you eat with a fork is granos de elote. In most of the Spanish-speaking world corn on the cob is mazorca de maíz. Maíz is corn in the most general sense, as a plant or crop, and also refers to the dried grains of corn used to make corn flour.
Corn was first domesticated in Mexico 7000 years ago and has deep cultural significance. It is tied to everyday life in myriad ways. There are many online resources regarding the cultural significance of corn in Mexico. This article from Mexico Cooks is just one example.
– los tomates verdes – Also known as tomatillos, or just tomates, this vegetable originated in Mexico and is a staple of Mexican cuisine. Tomatillos are the key ingredient in Mexican green salsas.
– los jitomates – This is the word used for red tomatoes in Mexico. Depending on the region, it can refer to larger red tomatoes, smaller Roma tomatoes or both.
– el molcajete – A molcajete is a traditional stone tool used to grind spices and prepare salsas and guacamole. It was used by the Aztec and Maya and is still used today in Mexican homes and restaurants.

Video extension activities
– Use the vocabulary picture cards for a variety of extension activities. The cards are black and white so that children can color them. There are blank cards so they can add more vegetables.
– Children can watch the video and order the picture cards as they watch. They can use the cards during the second half of the video to help them answer the questions out loud.
– Give each child a set of cards. Lay your cards out, saying them as you put them down. Children should put their cards out in the same order as they listen. Then, tell the kids to switch two cards: Cambia de lugar el brócoli por el chile. Do that several times and then have one of the children say the cards and everyone can check the order.
-You can find more activities in this list of 25 activities using picture cards. The list refers to animal picture cards, but many of the activities can be used with any vocabulary.
– Do a role play with the vocabulary. One person sells vegetables and the other is a buyer who arrives (practice greetings) and asks ¿Qué verduras hay?. This is also a good situation to review gustar if the buyer responds Me gusta/n or No me gusta/n.
– If any of the vegetables in the video are unfamiliar, try them. You might want to make green or red salsa.
– Have children create a mini-book, poster or video to review other vocabulary they have learned. Use the structure in the video: En la casa, hay muchos muebles. En la granja, hay muchos animales. En la tienda, hay mucha ropa. En la ciudad, hay muchos vehículos.
– Talk about the way the vegetables look in the market and how they are different than vegetables in grocery stores in the United States. Ask kids about vegetables they may have seen in their gardens or at farmer’s markets. 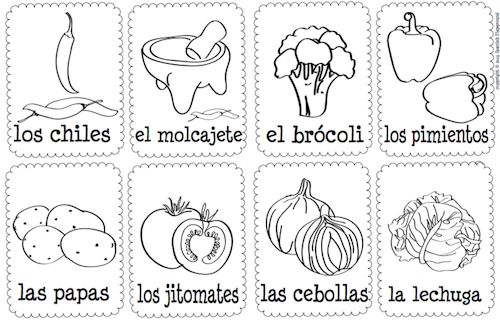