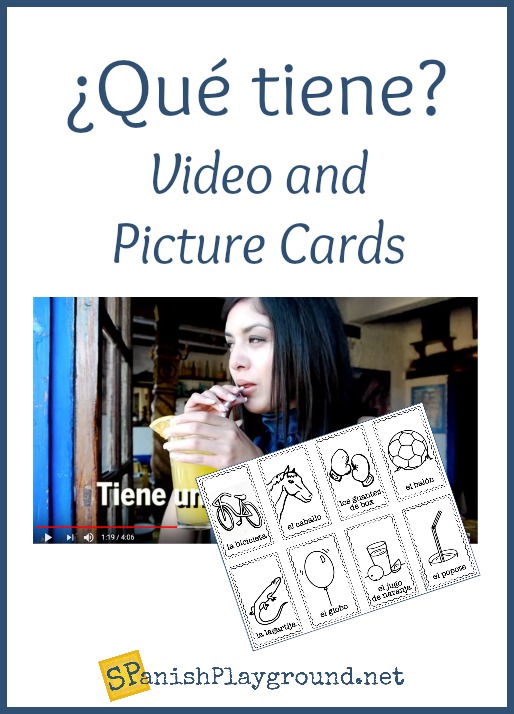 Below the video you will find vocabulary, cultural notes, activity suggestions and printable picture cards for games.

Spanish Words in the Tener Video

In this tener video, there are kids wearing boxing gloves. In Mexico, boxing is a major sport and Mexico has produced more amateur and professional world champions than any other country. The word el box  correct in Mexico and Ecuador according to the Real Academia Española.  Both hese countries and the rest of the Spanish-speaking world also use el boxeo.

This tener video uses the word lagartija. Mexico has many, many lizards. They appear in everything from toys to art because they are so common.

Kids hear the word popote in this tener video. In Mexico, a straw is a popote, but other countries use different words. See an infographic with 11 Spanish words for straw.

Un pescado is a fish that has been caught. Pescado is the past participle of the verb pescar (to catch, to fish). A fish that has not been caught is a pez. Although we often distinguish between fish that are food (pescado) vs alive (pez), that is not completely accurate. There are peces muertos, when fish die in oceans and lakes from oil spills, for example.

– Use objects to practice the vocabulary and the verb tiene. You can use un balón, un globo, guantes, un popote, un caballo (a toy). Dolls like Barbie and Ken work well for el novio and la novia. Ask ¿Qué tiene (child’s name)? or ¿Quien tiene (objeto)?

–  Play a guessing game with the objects or the picture cards in the third person. Have children guess what another child has. Ask ¿Qué tiene (child’s name)?

– Look at and learn more about largartijas in Mexico. You can get a sense of the amazing variety by doing an image search for lizards of Mexico.

– Color the picture cards. Talk about the vocabulary as you color.

– Describe a card. Have children identify the card you are describing.

– Give each child a set of cards. Lay your cards out, saying them as you put them down. Children should put their cards out in the same order as they listen. Then, tell the kids to switch two cards: Cambia de lugar al pescado por el caballo. Do that several times and then have one of the children say the cards and everyone can check the order. 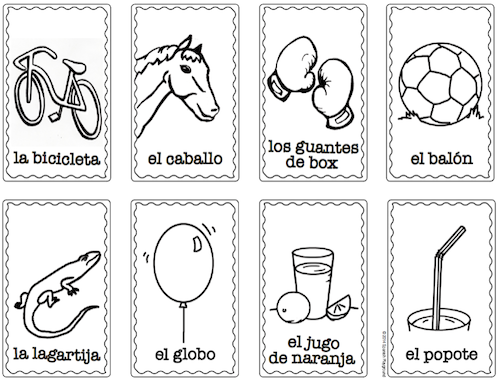 With this tener video there are lots of ways to practice the verb form tiene. Let us know how you used the video with your students!