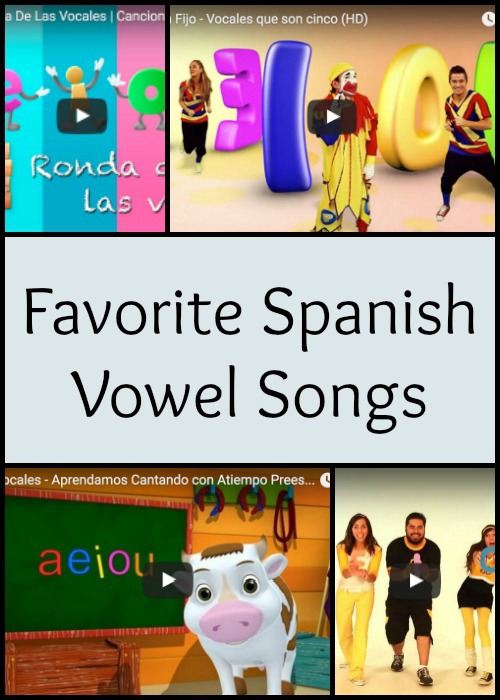 These Spanish vowel songs teach the essential sounds of the language. As they sing, children learn to recognize the consistent sounds of a, e, i, o, u and learn to produce them correctly. In addition to helping kids acquire accurate Spanish pronunciation, this is an important part of learning to read.

You will want to reinforce the learning in these Spanish vowel songs with games and other activities. Try this printable Spanish game of dominoes with vowels for more practice.

Check out more of our favorite Spanish songs for kids grouped by theme!

The video below shows one of my favorite Spanish vowel songs. It was produced by Atiempo Preescolar, a channel from Chile dedicated to preschool programming. Find ideas for teaching this Spanish vowel song and printable activities here.

This is another of my favorite Spanish vowel songs. It is based on the traditional song La risa de las vocales, but Baila, Baila has omitted some of the words that would distract from the song for Spanish learners. Instead, the song keeps just the fun laugh with each of the vowels.

My students love this song! I print the vowels on card stock (see pdf above) and we sing and dance holding up the vowels.

This traditional vowel song is by Cri-Cri and is still sung all over the Spanish-speaking world. The vocabulary is much more difficult than the songs above, but there is a great cultural component to share with kids. Talk about Cri-Cri and listen to some of his other songs. There are many videos of this song and modern versions by different artists.

This song connects each of the vowels to common vocabulary. First, the letter is introduced with an animal (and a baby dressed up as that animal) that contains the letter. Then kids sing about more words and images. Children sing a good portion of the song, but it is pretty clear. Students think the babies are cute!

There are many ways to combine movement and Spanish vowel songs for kids. like. Read more about activities for the vowel song from Fun with Spanish teachers, and find a list of words that begins with each vowel.

This is a cute song and kids can write the vowels as they sing. I don’t like that the video and song mix lower case and upper letters though. If your students are already confident writers, the song is fun for hearing the descriptions of how the letters are formed.