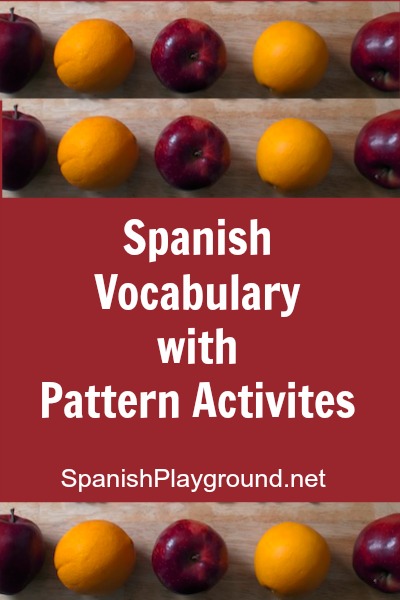 Playing with patterns or sequences, kids can speak lots of Spanish. I like pattern activities because you can associate vocabulary with a picture, an object or an action. In Spanish, patterns are called secuencias or patrones.

This is a simple printable activity to use with beginning Spanish learners. I included the words for the vocabulary because I’ll be using it with emerging readers. These activities also work well with only pictures.

In addition to the words for the objects in a sequence, children learn other language. They can practice common verbs like seguir (to come next or to follow) and hay (there is). They also use adverbs like primero (first), entonces (then), and después (then) as they talk about patterns.

These are the kinds of phrases you can use with kids as you talk about patterns:
Primero hay un perro. / First, there’s a dog.
Después, hay un gato.  / Then, there is a cat.
Sigue otro gato. / Another cat comes next.
¿Qué sigue? ¿Un perro o un gato? / What is next?  A dog or a cat?
¿Cuál es la siguiente figura? / What is the next figure?

There are lots of printable pattern activities online. For example, Matemáticas Ejercicios Resueltos has PDFs of patterns with shapes and colors.

Travel with Kids: Family on the Loose Giveaway
Spanish Games for Kids: Vocabulary for Puzzles