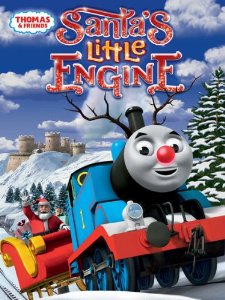 The new Thomas and Friends DVD has a Christmas title, Santa’s Little Engine, but kids will watch the 5 episodes beyond the holiday season. If you have little language learners at home, this Spanish video is an excellent way to provide them with more exposure. Change the language to Spanish and they will learn as they watch these new, entertaining stories. The video is available on Amazon.

Features that make this Spanish video effective with language learners are:
– 3 of the 5 stories are pattern stories, so kids can hear language repeated and predict what will happen.
– There is a voice-over that describes what is happening when there is no dialog. This is excellent language exposure, and children hear more Spanish than they do with the dialog of a traditional cartoon.
– The vocabulary is predominantly about actions and feelings. There are, of course, a few train words, but they are repeated and are clearly represented in the images.
– The characters have different voices, but they are all clear and easy to understand.

Ideas to support Spanish language learners
– Summarize the story for them, in English or in simple Spanish sentences, before they watch. You may have to watch it first, but telling them what is going to happen gives them a huge head start. It will increase comprehension and keep them watching longer. You can also watch the video once with the English audio if your children will be agreeable to switching to Spanish.
– Watch with them and offer support for key events by summarizing in simple language or acting out what happened.
– Watch with them and offer support for key vocabulary. You can pause the video if you need to. Then repeat a word and point to it on the screen or act it out.
– As long as they are watching, let them watch. When their attention wanders, turn it off. Paying attention to short clips is very valuable.
– Let them watch the same episode again and again, rather than going on to another episode.
– Use the language from the video in other circumstances. Mention the video to remind your child of the story. For example – Emily le dice a Thomas sígueme. Tú sígueme.
– There are lots of Thomas toys and other train toys. Play with your child and the toys as you watch the video, acting out what is happening. You can also play with train toys and use the language from the stories at other times.

These are the episodes in order of difficulty for Spanish language learners. I have included some of the important vocabulary.

La pequeña locomotora de Santa – Santa’s Little Engine
conducir – to drive
disfrazarse – dress up as
el trineo – sled
las vías – tracks
auxilio – help!
ayúdame – help me
In this episode, they are getting ready for a Christmas festival, but the festival is not part of the story. There are also several references to reinos (reindeer) but there are never images of reindeer. It would be worth clarifying the setting and the word reinos with Spanish language learners.

Disclosure: The company sent me a copy of this product to be able to write the article. I may also have been compensated and the post may contain affiliate links. All of the ideas and opinions are my own.