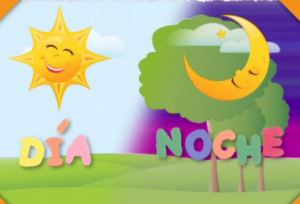 Semillitas is a Spanish language cable television channel for preschoolers from SomosTV. In Wisconsin, it is available through Charter Communications, but it is carried by other companies in different parts of the country. The Spanish videos for kids on Semillitas are designed specifically for the Latino community of the United States and Puerto Rico and dedicated to “la educación, estimulación y divertimento de niños en edad temprana a la vez de asistir a sus padres a proteger su identidad cultural e idioma” (the education, stimulation and entertainment of young children as it helps their parents protect their cultural identity and language).

Semillitas offers educational and culturally rich content for preschoolers. If you do not have access to Semillitas TV, the videos and games on their website are great for young Spanish language learners.

There are dozens of very short educational Spanish videos for children on the Semillitas website. The site is designed so that you select the videos you want to see, making a playlist, and then they play consecutively. Some of the videos are as short as 15 seconds, so this is a much better way to watch than having to select another video as each one ends. Also, this lets children listen to Spanish continuously, rather than switching from Spanish to English.

The instructions ask you to choose the videos that you want to play from the gallery below the video player. The videos are divided into categories: A colorear, Adivina quien es, Animales, Colores, Deletrear, Formas, Hora de reciclar, Karaoke, Música, Números, Opuestos, Sabías que, and Vegetales.

After you select the videos, you need to click the small red arrow under the video player. Then you can click on the first video to make it play. I did find one or two that would not play and simply went to the next video in the list.

Link to Spanish Video for Kids from Semillitas

The simple content of these videos is presented in complete, natural sentences. For example, the Animales videos have excellent live footage of wild animals and begin with the question ¿Qué ves? (What do you see?). The video continues Veo un gorila, for example, and then the word is pronounced broken into syllables, with the letters on the screen. For young children learning Spanish, hearing ves and veo each time is important exposure to the verb forms.

The videos in Opuestos, or Opposites, are another example of natural language used in context. They all use short, complete sentences and support the language with clear animation. The video for frío and caliente, for example, has this audio: El jugo está frío. El café está caliente. Frío y caliente son opuestos. This is a wonderful set of videos for children who are learning common opposites in Spanish.

The Música videos are traditional songs like Pin Pon, Que llueva and ¿Dónde están las llaves? The Karaoke videos have the words to sing along, but they are songs from the shows featuring characters that children may not be familiar with. This is also true of the Adivina quién videos where children try to guess who is knocking at the door. Those are the only two categories where it is helpful to know the characters. All of the others stand on their own as content for children learning Spanish.

The Semillitas website also has a set of games for children. Some of them do not have audio, but there is one matching words to pictures, a spelling game, a color activity and an activity for telling time that do have good Spanish audio.