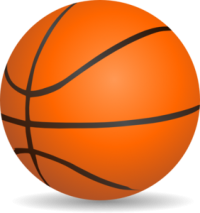 I use this Spanish verb practice game for kids with small groups when I want to give them focused practice conjugating verbs or answering questions.

The game is an oral review activity, and I also suggest it as a practice game at home. If you have a child who is learning Spanish, you can play this simple game together. I think my students particularly enjoy this Spanish verb practice because I play too, and they always win.

How to Play Spanish Verb Basketball

You can adapt this in many ways, but this is the basic idea:
First, you need squares of paper with a question or a subject and verb. Next, a player reads aloud what is on the paper and answers the question or conjugates the verb.
Then, the player wads up the paper and try to make a basket into a trash can or any container.

This Spanish verb conjugation game for kids makes the most of paper that has been used on only one side. I make a lot of squares at once by copying on the unused side and then cutting them apart with a paper cutter. The balls need to have enough weight to toss well; if you cut a sheet of paper into 6 squares, they are heavy enough.

Place the squares of paper where two or three players can reach them. Players draw one slip, read the square aloud, conjugate the verb (or answer the question) and shoot. The other players want to shoot, so everyone keeps drawing quickly, often starting their answer as soon as the person before them shoots. We do keep score sometimes, but only by the number of baskets made.

For yes-no questions, I have kids include the verb when they answer. To add more context to the verb conjugations, they can use the verb in a sentence. Of course, you can specify any tense. This activity seems a little mindless, but the movement keeps kids focused. Because they do not write anything, they can go through a lot of verbs and have fun with what could be boring practice.

I am attaching a couple of examples of what I print and cut apart, but there is nothing interesting or original about the material. It is trying to make baskets that is fun, and you can do it with any content.

One of the PDFs is tú and yo forms of a few common regular verbs that I used last spring with kids who were eight. The other is a set of yes-no questions that I used with a group of kids that were a little older.

Be sure to check out all our Spanish classroom games on our Spanish Games for kids page. If you have favorite games, be sure to let us know so we can include them!