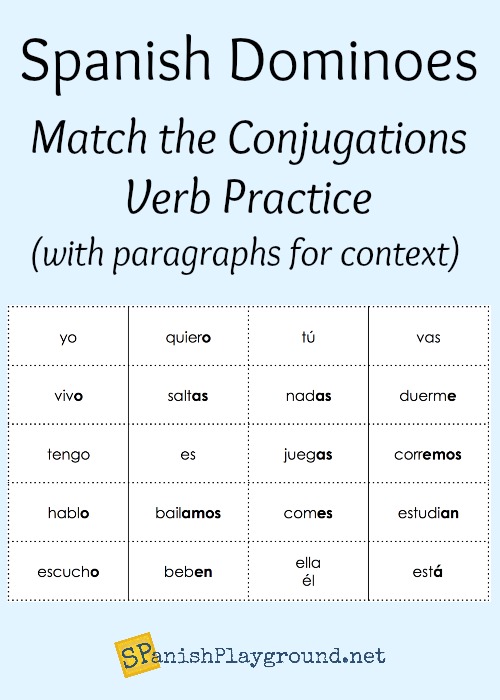 As a rule, I don’t teach much explicit grammar with elementary age students. My goal is to have students get lots of exposure to language in context and learn to produce chunks of meaning. However, I do have some older students who are learning the patterns of verb conjugation. Spanish verb games like this set of printable dominoes are a good way to make them aware of endings.

In the Spanish verb games we play, the vocabulary and verb forms are familiar. In other words, none of the words on the dominoes are new. They have also been introduced to the idea of verb conjugation and practiced identifying the subject in sentences in stories and other activities.

With Spanish verb games at this level, my goal is to make students aware of what they already know, of the patterns they understand when they are listening. So, playing Spanish verb games like this dominoes game, students do not have to conjugate the verbs. Rather, they have to match a pronoun or a conjugated verb to another verb in the same person. It really helps them see the pattern!

For example, with these dominoes, vivo, quiero, tengo, escucho, hablo all match each other and also all match the pronoun yo. On the dominoes, I put regular verb endings in bold, to remind players to focus on them. I included a few irregular verb forms like es and vas because my students are familiar with them.

To play this dominoes game, print two sets. There are blank cards if you want to add additional verbs.

Of course, this game is more effective if you use the verbs in sentences and reinforce their meaning. Spanish verb games should not stand on their own. Any focus on conjugation should have a context so the conjugation makes sense.

For example, you can reinforce the meaning of the words in Spanish verb games like this one with a short paragraph.  These are not exciting stories, but they serve to remind students that the words mean something. You can have students draw a quick illustration of the paragraph or answer questions after you read it together.

Short paragraphs with the verbs used in the domino game.

Verbs are an essential part of learning language, and Spanish verb games make mastering conjugation much more fun. What Spanish verb games do you do in your classes? Share your favorite activity here or join our conversation on Facebook or Twitter. We share lots of great ideas and we would love to include yours!