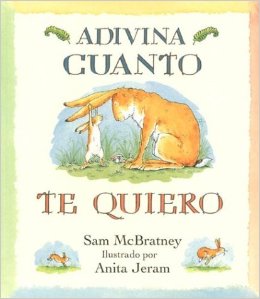 This review was contributed by Brooks Lindner from Sonrisas Spanish School. He writes about the Spanish story Adivina cuánto te quiero by Sam McBratney.

This delightful story of filial love is one that will charm children and is also very practical for teaching Spanish. The story begins with the little hare, Caramelo, saying to his dad, “Adivina cuánto te quiero.” (“Guess how much I love you.”) Then, Caramelo tries to demonstrate to his dad how much he loves him in various ways: as much as he can stretch his arms apart, as high as he can reach into the air, and as high as he can hop. Each time, his dad expresses how much he loves Caramelo by stretching his arms farther apart, reaching higher, and hopping higher. Finally, as Caramelo is getting sleepy, he tells his dad that he loves him all the way to the moon. As his dad puts him to bed and kisses him goodnight, he whispers that he loves Caramelo all the way to the moon—and back.

The amazing thing about this book is how well the illustrations convey the meaning of the Spanish text. It is almost as if the characters in the book are performing TPR (Total Physical Response)—the method of delivering language in a physical context that makes it comprehensible. For example: Caramelo says, “Yo te quiero hasta aquí arriba” (“I love you up to here.”), and there is a picture of him on his tippy toes with his arms and hands stretched above his head. Most all of the text in the book follows this format with pictures of Caramelo and his dad doing just what the text says. For this reason, Adivina cuánto te quiero gives you the opportunity to read an authentic text to young Spanish learners without any translation—making it a valuable language-learning experience.

There is a lot of practical vocabulary in this book that you could incorporate into various Spanish lessons. In Level I of the Sonrisas Spanish Curriculum we use this book for a Valentines’ lesson to teach the phrase, “Te quiero.” You could use this book as an introduction to teaching body parts. It could also be useful in a lesson on prepositions. The text includes many: arriba, abajo, sobre, lejos, encima, and hacia included. The scene at the end of the book when the dad puts Caramelo to bed and kisses him goodnight could be used to teach bedtime routines and the phrase “buenas noches.” You could easily have students act out the book or do a role play based on the book.

At the very least, Adivina cuánto te quiero is a book that captures young learners’ imaginations, and one that they will want to return to again and again.