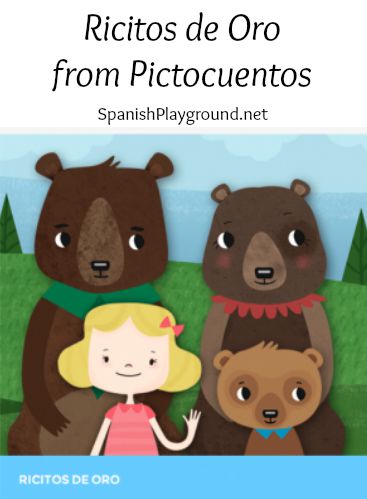 Pictocuentos are stories that use pictures or symbols to support the meaning of the text. The pictures, or pictographs, are useful for learners who comprehend images more easily than text and can also be used with second language learners. The website Pictocuentos is putting Spanish stories for kids like these online. They have illustrations, text, audio and pictographs (also called pictograms). It is a relatively new endeavor, but their first story, Ricitos de Oro, or Goldilocks and the Three Bears, is complete and there are more stories on the way.

This Spanish story for kids has features that make it especially effective for language learners. For young learners who do not read yet, it is an audio story with simple language and good illustrations. For children who are learning to read or who already read, the text is supported in several ways that help them learn Spanish. Ricitos de oro is also a familiar story, and that helps them understand new words.

There are animated illustrations for each sentence of the story. The illustrations correspond closely to the text, and the words appear just below story scene. I am not referring to the pictographs; those appear on the lower half of the screen.

The audio on this Spanish story for kids is excellent. It is clear and the rate of speech is not too fast. There is an important option – you can turn off the background music by clicking on the music icon on the top left of the story window. I would suggest turning off the music so that children can focus on the language. There is also an options icon that will let you configure the font size and placement of the text with the pictographs. If you would like to hide the story text below the illustration, you can also do that.

In addition to the illustrations and the audio, the pictographs provide another level of support for Spanish language learners as they listen to Ricitos de oro. Each word in the story is represented by a pictograph, so kids can refer to them to decipher individual words that they do not know.

Pictographs capture the essence of the meaning of a word rather than trying to represent its form in the story.

For example, this pictograph represents the word día.

This pictograph represents the verb llamarse.

This pictograph represents the word pequeño.

The form of the word as it is used in the story appears above the pictograph. Because the same pictograph is repeated each time any form of the word is used, it becomes a quick reference to the meaning of the word, ideally without having to translate. Associating an image with a word also makes it much easier to learn and remember.

Pictographs are a natural and effective way to support language acquisition. This Spanish story for kids is an excellent example of how carefully designed symbols can be used with language learners.

Link to Spanish Story for Kids