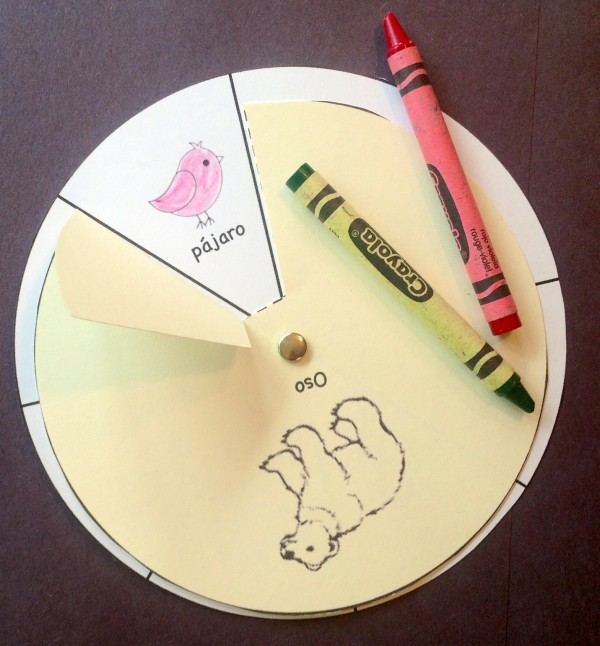 Oso pardo, oso pardo, ¿qué ves ahí? is the translation of Brown Bear, Brown Bear, What do you see?. This is a wonderful Spanish story for kids. The pattern, rhyme, and simple sentence structure soon have children chanting along.

Eric Carle’s illustrations beautifully represent the animals and the colors, so children understand the language, and the repetition at the end of the story reinforces the vocabulary. Also, the story is familiar to many children, making the language even more accessible.

You can do lots of activities to reinforce the language in this Spanish story. The best activities incorporate movement or a visual to create comprehensible input and engage children.

Yoga is a wonderful way to represent the animal vocabulary in the book and at the same time get kids moving. Children love doing yoga poses! Kids Yoga Stories has a sequence of five poses for Brown Bear, Brown Bear, What Do You See? You can find illustrations of the poses on their web site.

Using just five words is a good way to work with new vocabulary. The sequence also makes a quick, easy review of the words once children are familiar with them. Use the book to display the illustrations or arrange other pictures of the animals to support the language as you do the poses. The yoga poses are not done in the order the animals appear in the book. You can learn more about doing yoga with kids in Spanish here.

You can do this simple activity to practice the verb ver and Spanish animal words. It works with one child or a group. To play, you give the kids a prompt and they move to the animal. Spread pictures of the animals on the floor or post them around the room. Start with four animals if the vocabulary is new. There are many sets of coloring pages and figures for the story online and you can find links below. If you have a group, you will want to have several pictures of each animal so that you will not have everyone trying to fit into the same space.

There are a couple of ways you can tell the kids which animal to find. The first models veo and the question ¿Dónde está?: Veo un gato. ¿Dónde está? Veo un caballo. ¿Dónde está? If the vocabulary is new, you can make the animal sound to give them a hint.

You can also ask ¿Ves un gato?. You can structure the game so that kids say ¡un gato! ¡un gato! or Veo un gato. as they go to the correct picture.

This simple game uses the sequential structure of the story. Each child has an animal from the story. Kids start in a circle. As you read the story, the “animals” line up. This reinforces the meaning of me mira a mí. You can also have them act out their animals as they get in line. It is okay if animals are repeated; both children get in line at the same time.

Play this game to practice using veo and understanding ves. The teacher asks the questions and kids answer, which keeps the game moving quickly. Each child has a picture or puppet of one of the animals. The teacher asks, for example, Rana, rana, ¿qué ves?  The child with the frog answers with any other animal in the circle: Veo un caballo. The teacher then asks again, Caballo, caballo, ¿qué ves? and that child answers with another animal. If you have more than nine children, you can add colors for the animals that are repeated.

This animal wheel helps children retell the story.  There are versions with and without the Spanish animal words.

I made the wheel and use it in groups because it is much easier than activities where each child has a set of nine cards. The animal wheel has two circles. The top circle has a window and as it spins, it shows one animal at a time, in the order of the story. Before kids put the wheels together, they color the animals based on the story.

We make the wheels with a metal brad. You can have kids cut the window out completely, or if they want to be able to hide the other animals they can leave a tab to close. The photo shows the tab.

Kids love rhythm and rhyme. I made up this chant based on the animals and colors in the book. If you are working with kids in kindergarten or even older, they can do this as a hand-clapping game. They can also just learn it to say with the animals displayed in order on a felt board or with a set of pictures. The chant follows the order of the book.

This traditional game is another way to practice the forms of ver. It is the Spanish equivalent of I Spy. You can find printable versions of a Veo veo game with the vocabulary for Brown Bear here: I Spy Games for Brown Bear, Brown Bear.

Additional resources online
There are dozens of printables and activities for Brown Bear, Brown Bear, What Do You See? online. Many of them do not have words and can be used with the Spanish story for kids learning the language. In particular, Make Learning Fun and DLTK have lots of printable templates and games.

This Spanish story for kids is available from Amazon.