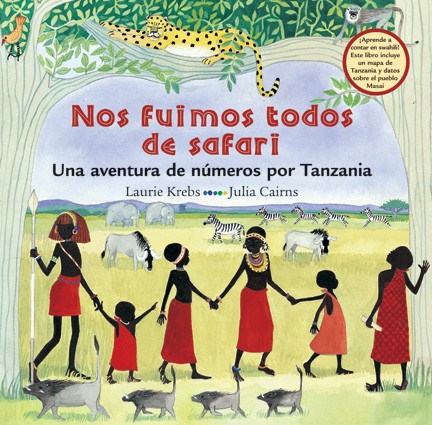 In my work with Spanish learners, of course I look for picture books that teach Latino culture. Given that, it might seem strange to choose a book that introduces children to Masai culture.  Nos fuimos todos de safari does just that, but it is an excellent choice for native speakers or for children learning Spanish. After all, learning Spanish doesn’t mean only learning about Latino culture.

This counting book is set in the savanna of Tanzania and follows a family as they move through the day and across the plain counting the animals they see. A predictable pattern and rhyming text help engage children with the language. For each number, the text begins Nos fuimos todos de safari… and on the next page tells who counted the animals, always with the verb contó. The beautiful illustrations correspond closely to the text to help children understand the story.

This book is appropriate for a wide range of language levels. Beginning learners will focus on the words for numbers and animals. For more advanced learners it is excellent exposure to verbs in the preterite and adverbs. Of course, all of the language is in context, so regardless of level children are learning the deep structure of the language.

Here are few ways to actively engage kids with the text as you read.

– Encourage kids to say the predictable parts of the story with you. Each page begins Nos fuimos todos de safari. They will also be able to predict contó and the numbers because they always follow a name: Arusha contó uno, Mosi contó dos, Tumpe contó tres, etc.

– After you read each page, ask how many animals there are and count together: ¿Cuántos leones hay? ¿Cuántas jirafas hay?

– The story names a different person who counts the animals each time. This is an easy way to review ¿Cómo se llama? After you read the page and the name, point to the person and ask ¿Cómo se llama?

– Act out the animals in the story by doing a yoga sequence. You can find a yoga sequence for Nos fuimos todos de safari on Kids Yoga Stories. Movement enhances language learning, and kids love it. Read more about yoga and language here.

– Use the adverbs to count like the characters in the book. In the story, each person counts a little differently – rapidísimo, animado, con alegría, correctamente, muy orgulloso.  Although some of the words are closely related, kids can count with different voices and mannerisms to distinguish the ones that are different.

Use the illustrations to point out the natural and geographical features mentioned in the text: el sol alto, la acacia vieja, el llano mojado, el valle rocoso, el cráter antiquísimo, etc. Each of these features is described with an adjective so you can ask kids ¿Cómo es la acacia?,¿Cómo es el llano?, etc.

Use the map and the information in the back of the book to talk about Tanzania. You may want to show kids where on the continent the country is. This is a good map of Africa in Spanish. Zoom in to look at specific regions and countries.

You may also be interested in this post: Spanish Story for Kids – Activities for Vivamos la Granja 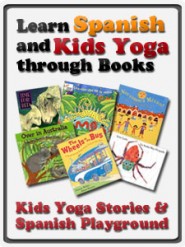