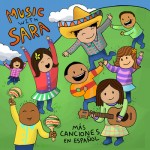 I recently listened to Sara Quintanar’s new CD, Más canciones en español. The whole album is a celebration of the sounds and cultural vibrancy of Spanish. Most of the songs are traditional, but they were carefully chosen to be accessible and appropriate for Spanish language learners. Sara teaches music in Spanish language classrooms and knows the kind of songs that work with kids. The children sing with her on this CD and they are wonderful!

There are 18 songs on the CD and that is a lot of music to talk about here. I will just mention a few of my favorites for children learning Spanish. Listen to complete versions of the songs here: Más canciones en español. You can download individual tracks or the whole CD if you like. Sara also makes the lyrics of all of these Spanish songs available on her website Music with Sara.  You can visit Sara on Facebook too.

Many of the songs play with the sounds of Spanish. Not only are they fun to sing, they are wonderful for pronunciation. A few are well known, but there are some excellent tracks that are not recorded as commonly. Capotín and Tririlín, for example, are the kind of songs that kids love to sing.

Two of my favorite songs on the CD happen to be very short. I like these because they create a clear visual image and because they are funny. Kids love funny songs! The first is El Dragón, about a hungry dragon with twenty feet who eats his own tail. The song is just a few lines, but it repeated several times – an excellent strategy for Spanish language learners.

Another short song that paints a clear mental picture is Viva la media naranja. This song is one of two bonus tracks that you get when you download the CD. There are lots of versions of the traditional song, but this one is great for children learning Spanish. The song begins as a cheer to la media naranja and la naranja entera, but then the orange goes rolling down the road! Again, Sara sings the song several times so that kids get the repetition that is so important to language learning.

The other bonus track on the CD is an action song called Pizza pizza daddy-o. I am always looking for Spanish songs that combine movement and language. This one has a series of actions that kids do as they answer with the refrain Pizza pizza daddy-o. It is entertaining and the movements reinforce the meaning of the verbs – a great new find for my action-song list.

As I mentioned, some of the songs on Más canciones en español are well-known children’s songs in Spanish. The CD includes wonderful versions of the classics Los pollitos, La víbora de la mar, Un elefante se balanceaba, and Barco chiquito. They are songs that children learning Spanish should know, and these are excellent versions to share with them.

This is a CD packed with music, culture and fun. There is something for children at all levels – songs they will listen to for years and remember even longer.

You can read about another song and video by Sara here: Spanish song for Thanksgiving