Disclosure: Mariana Iranzi sent me a copy of Hola Hello so that I could write the following article. All of the ideas and opinions are my own. 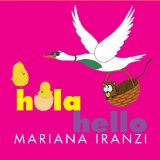 Mariana Iranzi recently released Hola Hello, and the music is bright and captivating. The songs feel nothing like a language lesson, but there is no doubt that kids will learn lots of Spanish listening to this CD. Hola Hello is available on Amazon, iTunes and cdbaby.

Mariana is originally from Argentina, and Spanish is the predominate language in these songs. There is some English incorporated into a few, but always in a way that complements the overall composition. Children, and their parents and teachers, will love all the songs on Hola Hello, but here I will mention five of my favorites for Spanish language learners.

Hola Hello
The title track starts slowly, like a child waking up, and then jumps into a catchy rhythm, the same way kids jump into their day. The song greets the world as a new day starts and the beat will make kids want to learn the words and sing along.

The words they will learn include: cielo, sol, día, mamá, papá, jugar, amigos, flor, escuela, señor, trencito, camión, abuelita, cuidad, guitarra, perrito. This is perfect vocabulary for children learning the language because it describes their world. The song also includes one line that is sung more slowly: Hola, hola, aquí estás, una vez más para comenzar. Hola, gracias por esta nueva oportunidad. What a wonderful message to begin the day. If you teach Spanish, this would be an excellent greeting song! You can listen to the song in this video.

Bú is an excellent example of how important rhythm is to the way children experience this music. The drums make this song a visceral experience – I can guarantee that kids will be moving to the beat. In terms of language, the same rhythm that grabs kids and makes them dance ensures that they are emphasizing words and phrases correctly. This is true for all the songs on the CD.

Veo veo
I love this version of the traditional game Veo veo, the equivalent of I Spy in English. In the song, children are guessing farm animals. Like the traditional game, the song has this exchange: Veo, veo ¿Qué ves? Un animal ¿Y cómo es?  A one-line description of the animal follows, for example, Come pasto y hace mu.

This song describes the words gato, perro, pato and vaca, but you could easily sing about any animal. Once children learn the song, you can also sing the traditional una cosita instead of un animal and extend the game to guess different objects.

La semana
Songs are one of the easiest ways for children to learn the days of the week in Spanish. La semana has lots of repetition, giving kids the opportunity to learn the sequence. It also associates each day with an activity, so they practice common verbs forms like voy, leo and tengo.

Si fuese
As they sing this song, kids imagine being animals and act out the ways they move: si fuese un pájaro, volaría así; si fuese un pez, nadaría así. I am very happy to find a simple song that teaches this common structure (si + past subjunctive verb, conditional verb). Fuese is often used in South America, but you can also teach and sing fuera. As kids fly, swim, march and hop, the actions reinforce the meaning of the verbs.

There are other wonderful songs on the CD Hola Hello. In particular Mariana Irani’s version of Los pollitos is great fun, and the lullaby Bichito de Luz is lovely. All of the songs pull children into a world of music and language, creating an exceptional language learning adventure. This CD would be an excellent addition to any home or classroom collection of music.

You may also be interested in this post: Mother’s Day Song in Spanish – Feliz día Mamá by Mariana Iranzi