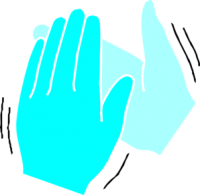 This is probably one of the best known Spanish songs for kids in the U.S. It was composed by Gil Raldiris of Puerto Rico and is performed by Tom Pease, Sol y Canto,  Music with Sara and other artists. It is often sung with the English version at school programs. The song is popular because it teaches just a few body parts and kids love it. It is short, fun, and they get to clap, stomp and dance.

This Spanish song for kids is perfect for beginning language learners. It teaches just a few body parts, common verbs, and uses movement to enhance learning.

Music with Sara has a recording of this song that is really clear and excellent for kids learning Spanish. It uses the verb decir instead of hacer and the word cuerpo in the last line. You can listen to it here and buy it from Music with Sara.

Sol y Canto also sing this song. They sing hacer with manos and pies and decir with boca. They sing it faster and faster each time, something that kids love! The version from Sol y Canto is available on iTunes and Amazon.

The actions are fairly obvious from the lyrics. With the first line, Mi cuerpo hace música, kids can indicate their bodies by moving their hands from their heads to their knees. With manos they clap and with pies they stomp. With boca they point to their mouths. For the last line, kids dance, moving their waist from side to side. You can see lots of videos of classes performing the actions by doing a search for the song on YouTube.

Mi cuerpo hace música is an excellent example of a Spanish song for kids that effectively teaches language. It has repetition, movement and is fun to sing.

You may also be interested in this post: Spanish Song for Kids – En la granja de mi tío