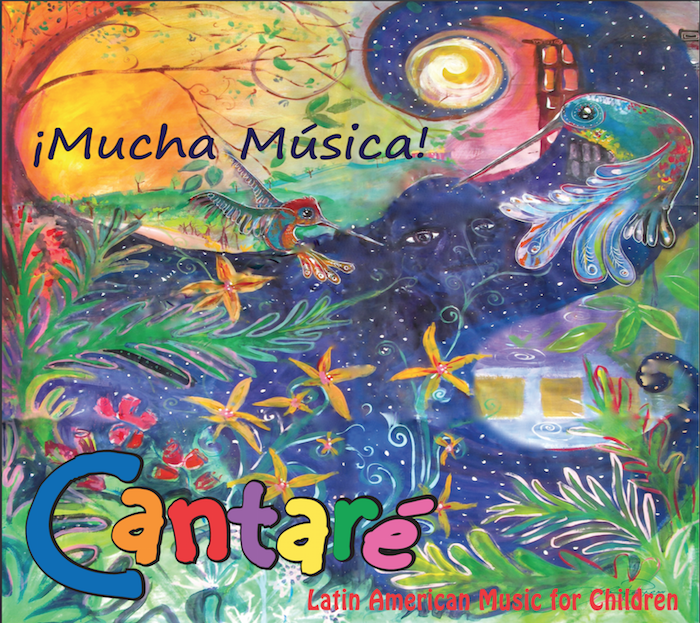 Cantaré, a wonderful group based in the Washington DC area, has recently released a new CD called Mucha música. The group is led by vocalist Cecilia Esquivel and Dani Cortaza, who plays strings and bass and arranged most of the songs. Cantaré offers a combination of accessible language, culture, and fabulous music to children learning Spanish. You can learn more about the group and their Spanish songs for kids on the Cantaré website. You can also read a review of one of their earlier CDs here.

Cantaré is giving away 3 CDs to Spanish Playground readers: Mucha música, Al agua pato and Baila Para Gozar. Enter to win one of the three CDs in the Rafflecopter below. Sorry, U.S. shipping only on this one.

The new CD Mucha música has a varied, culturally-rich selection of Latin music. Most of these are Spanish songs for kids, although there are a few in English and Portuguese. The Latin rhythms include salsa, merengue, cha cha cha, samba, bossa nova, and vallenato. You can listen to clips and purchase songs on CD Baby and Amazon.

Outstanding Features of these Spanish Songs for Kids

Mucha música is the right title for this CD because it has a lot of music. I’ll just mention two of my favorite songs and leave you to check out the rest. Both of these Spanish songs for kids incorporate dialog – a wonderful feature for language learners!

Adiós – If you are looking for a new good-bye song for a class, this is a great option! Like Me gustan las pupusas, it includes a dialog. First, the song announces that the party is over and it’s time to go, and then the singers respond that no, they don’t want to go. It is a very fun song to sing! In fact, I won’t be a bit surprised to hear these lines when kids don’t want to leave.

In addition to the joy music brings children, it is one of the best ways to learn language. This new collection of Spanish songs for kids from Cantaré will delight the children in your life as they sing Spanish into their minds and hearts.