SingALingo is a fabulous way to introduce children to Spanish. En mi casa is a CD of songs to use Spanish as a part of daily routines. The book Buenas noches, amigos and a set of Lyric and Vocabulary Cards compliment and support the music on this award-winning CD. You can visit SingALingo to read about all of their great products.

I always encourage parents to use Spanish with daily activities, like setting the table or getting ready for bed. SingALingo makes incorporating Spanish into these everyday routines easy and fun.

The songs on the En mi casa CD are short and lively. They are songs that you can listen to over and over, and even more important, they are so singable. I listened to these songs as I was driving to interpret at a clinic about twenty miles from where I live. I sang the whole way; it was impossible not to! Many of the songs are also designed to be combined with actions and that makes them even better learning tools. The CD is called En mi casa, but this music would work really well in a preschool or other class setting, too.

With the CD, SingALingo sent me the Lyric and Vocabulary Cards. These are reference cards with the lyrics to the songs on one side and related words and phrases on the other. They are compact, study cards on a ring that you can take anywhere and flip through easily. I think these cards are a really valuable tool to go with the CD. They make it possible to sing and speak Spanish wherever you might be.

The picture book Buenas noches, amigos also compliments and reinforces the songs on the CD. The text is the lyrics of two songs, and the pictures exactly explain the meaning of the words. This book is available to buy separately with the two songs as downloads. The combination of the CD, the cards and the book are a worthwhile investment and a wonderfully effective way to begin to teach a child Spanish. 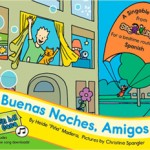 Several of the songs in the En mi casa CD use the music itself to create a context for the language. For example, the song Marcha has music that accompanies each action (marchar, correr, bailar, saltar, caminar). The music is a clue to the meaning of the verb children hear and act out.

The music also reinforces the language in the song Escóndete. This might be my favorite song on the CD because it is so clever. The song Escóndete (Go Hide) is about playing hide-and-seek. There are three parts to the song and the first two are sung as a round. I like rounds, but this is the first one I have heard where the overlapping voices reflect simultaneous activities. The first part of the song is counting to ten, which makes the round easy. The second part is about hiding. As children sing the round, they will relate the Spanish to these familiar routines of hide-and-seek. The third part of the song ¿Dónde estás? is about looking for the others players. All three parts of the song reinforce the meaning of the Spanish by mimicking the familiar structure of the game.

The CD En mi casa has earned the National Parenting Seal of Approval, the Parent’s Choice Foundation Seal of Approval and won an iParenting Media Award. You can hear samples of the all the songs on the SingALingo website. You can also learn more about the creators of SingALingo and get tips for helping your children learn Spanish. I encourage you to try SingALingo and introduce your children to Spanish with these wonderful songs!