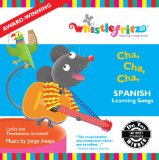 I have been having a great time with the Whistlefritz CD, Cha, Cha, Cha -Spanish Learning Songs. This award-winning collection of songs for children has a combination of original works and traditional music in Spanish. Visit the website to learn more about the Whistlefritz Spanish CDs and Spanish DVDs for kids.

The CD Cha, Cha, Cha is designed for children learning Spanish, but this is music that native speakers will enjoy just as much. The original songs teach basic concepts like the vowels, the days of the week, the months, and the seasons. Jorge Anaya’s arrangements of the traditional songs are so well done that they feel “right” to native speakers. This is excellent music for learning Spanish, but it is also just excellent music.

The original songs will teach Spanish vocabulary, verbs, and pronunciation to children learning Spanish. These songs are carefully designed language-learning tools. Many can be combined with actions, and they all create a context that gives the language meaning. I will mention a few of my favorites to give you an idea of how carefully crafted this music is.

Las estaciones (The Seasons) is about the weather in each season and the clothes children put on to go out to play. The weather vocabulary reinforces the meaning of the clothes words and vice versa. The language – season, weather, clothes – comes together to make a logical whole so that kids understand and remember it. This song can easily be combined with actions – one of the best ways for kids to learn Spanish. Like lots of the songs on this CD, it is very visual. It would be a great song for kids to illustrate. I also love the message of this song – that you can always be outside. No matter the weather, you dress for it and go out to play. Living in Wisconsin, this is the attitude you have to have!

Me gusta viajar (I like to travel) is a song that lends itself to really fun actions and also to being illustrated. It teaches lots of vocabulary, but so logically that kids will learn it without realizing it. The song begins Me gusta viajar….por cielo, por tierra o…por el mar (I like to travel… through the sky, over the land or… by sea). The verses that follow are about how we travel in those places, and carefully incorporate the vehicles carro, tren, bote de vela and avión (car, train, boat, plane), the opposites abajo – arriba and rápido – lento (above – below and fast – slow) and words we use with geography like cerro, puente, ciudad, campo, and bahía (hill, bridge, city, countryside and bay). There is plenty of repetition and an overall symmetry that makes the song very easy to learn.

Los días de la semana teaches the days of the week and a lot more Spanish. As vocabulary, the days of the week are very abstract. The words only have meaning in association with something concrete (you can get a sense of this if you try to describe the essence of Monday and distinguish it from Tuesday). The song Los días de la semana provides that association by pairing the days of the week with different actions and body parts. Lunes, levanto los dos brazos. Martes, yo salto en un pie. (Monday, I lift my two arms. Tuesday, I jump on one foot). This is a cumulative song, so each time you add a day and action, you go back and sing the other days too. It is active, fun and a wonderful way to learn Spanish.

Los días de la semana is a great example of a children’s song that could, and should, be used at other levels. Middle school and high school classes would learn the days of the week in no time, and also learn body parts and verbs in a natural, entertaining way.

This CD also has an well-chosen selection of traditional songs. These are some of the best known children’s songs throughout the Spanish-speaking world. They include Que llueva, La cucaracha, Los elefantes and El barco chiquito. They are songs that children learning Spanish will love and also a part of the cultural knowledge that is so important in learning a language.