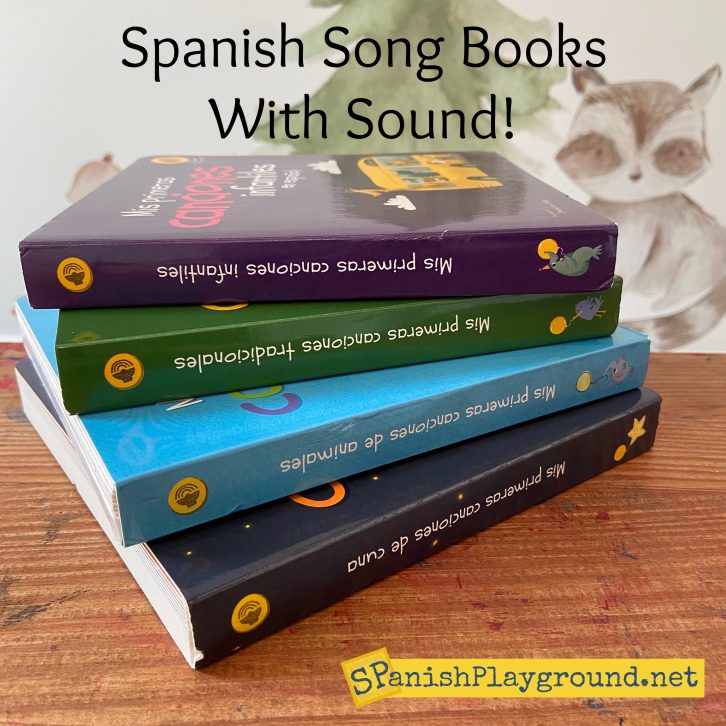 The Spanish song books with sound from Lufi and Friends hook children on reading and singing in Spanish. What a fabulous way to learn language!

With these song books, children push a button on the page and hear the song. The sound quality of these books is excellent, and the button on each page starts and stops the song.

The songs are short versions of children’s songs recorded by native speakers, and the books themselves are sturdy board books that stand up to lots and lots of use. That’s important because these books get many hours of play!

In addition, Lufi and Friends designed these Spanish books with sound specifically for language learning. The adorable illustrations support the lyrics, making it easy for kids to understand and learn the songs in Spanish.

You can find all four titles on the Lufi and Friends website.

I wrote about the animal songs and lullabies when they were released. You can read more about those titles here: Spanish Song Books with Built-In Music.

This book has 6 popular songs your little ones will recognize right away. All of these songs have actions or finger plays which make them perfect for learning Spanish. Movement enhances language acquisition!

This book has 6 wonderful versions of classic children’s songs. Children all over the Spanish-speaking world grow up with these songs, and your child will love them too.

Our Experience: Lots of Learning and Love

My granddaughter turned two a few weeks ago, and she has been “reading” and singing these books since she was very little. I am so happy these song books with sound have given her independent access to Spanish without relying on a screen.

More importantly, she is in love with these books. She adores reading to herself and playing songs for us (she takes requests). The books get tons of use, and yes, the batteries do wear out. I suggest getting extras because my granddaughter is sad when the songs stop playing and relieved that we can easily “fix” them.

After two years, our first two books wore out. I just can’t be disappointed that after that amount of time they no longer worked – she pushed the buttons many hundreds (maybe thousands) of times!

In addition, I would not have had to replace them because she knows the songs, and we could read and sing with the books. But hearing the songs makes her so happy I decided to buy them again.

Spanish song books from Lufi and Friends give children independent access to Spanish without screens. The books are full of culture and have darling illustrations to support the lyrics. If you’re raising Spanish speakers or know someone who is, these books are a wonderful way to learn language.