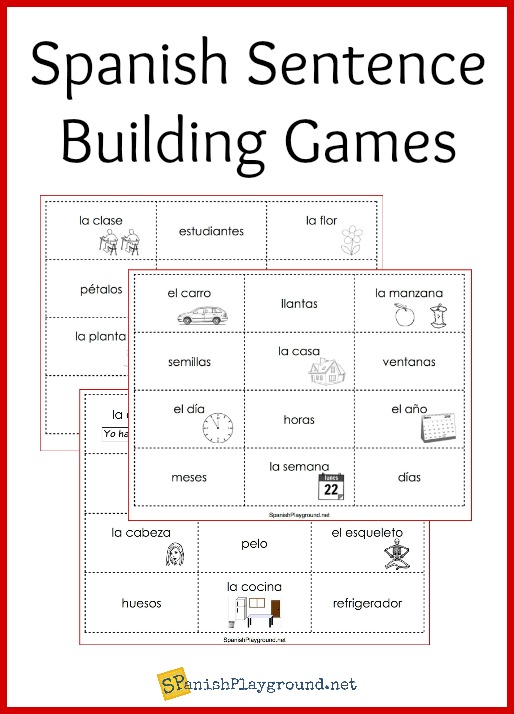 These four Spanish sentence building games use common vocabulary and the verb tener. They all consist of building sentences with pairs of related words. The games keep students engaged as they create complete, grammatical sentences.

The words I chose for these Spanish sentence building games are pairs of related words where one word is a whole and the other is a part of that whole. Students practice making Spanish sentences by joining the two words with the verb tener. For example, they make sentences such as La mano tiene dedos,  La planta tiene hojas, and La casa tiene ventanas.

Download the printable Spanish sentence building cards and the game instructions at the end of this post.

Jumbled sentences in Spanish are a typical exercise to practice forming sentences. The Spanish sentence building games below are similar, but in game format to make learning fun.

Also, because the sentences use the same structure, these games combine the idea of jumbled sentences in Spanish with the support of a model or sentence frame. Students need to understand the vocabulary and put the words in a logical order, as they do in a Spanish sentence unscramble. However, they quickly hear the pattern of the model and can produce correct, logical sentences with familiar vocabulary. 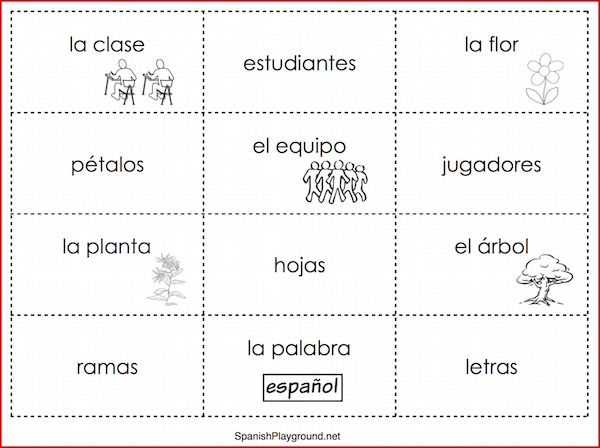 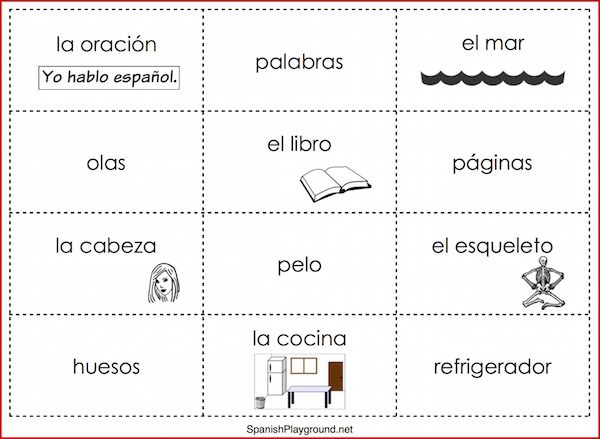 Use the printable cards below to play these easy Spanish sentence building games. You can add additional vocabulary pairs based on your content.

The vocabulary pairs on the cards consist of a  “whole” and a “part.”  The “whole” has a definite article and a noun (el carro, la cabeza). The “part” does not have an article (llantas, pelo). Most of the words on the part cards are in the plural. 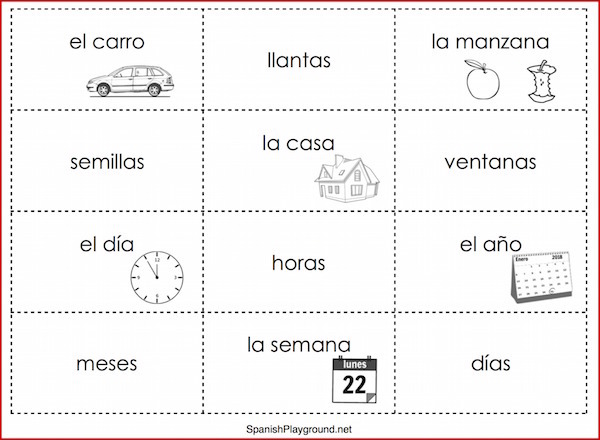 With all of these games, take time to review the vocabulary on the cards before you play. Familiarize students with the concept of the whole and part and give the examples of the sentences they will make with the verb form tiene.

Play with 2-4 players. The object is to form pairs to build sentences and get rid of your cards.

Deal each player 6 cards. Place the remaining cards face down in the center and turn the top card over beside the pile.

The first player has the option of taking the card that is face up if it lets her build a sentence with the cards in her hand. If it doesn’t, she draws from the pile.

She then discards one card and places any pairs she has in her hand on the table as she says a sentence using the vocabulary on the cards.

Play continues with each player taking a card from the pile or the discard pile, discarding a card and placing matching pairs on the table to make sentences.

The first player to get rid of all her cards wins the game.

You can play this game with 2 or 3 players. To play, sort the cards into matching pairs. Then, each player takes an equal number of pairs. If there are 2 players and they use all the cards, they will each have 13 pairs or 26 cards.

Next, each player places her cards face down on the table. The players count 1, 2, 3 and begin to flip over their cards and pair them.

When one of the players finishes matching her cards, she says “¡Ya!”  and all play stops. The player who finished first then says the sentences her cards create. If one of them is wrong, the other player wins. If 3 people are playing, she is eliminated and the other players again begin to pair their cards until someone says “¡Ya!”

You can also play ¡Ya! in teams, with two players working together to match their cards before the other team does.

In this game, players work together to build sentences as one asks a question and the other answers. To make it competitive, race against another team to build the sentences.

Place the part cards (the cards with no definite article), face up on the table. One of the players has the pile of whole cards and asks her partner “¿Qué tiene …?” using the word on the card. For example, she asks ¿Qué tiene el mar? The other player finds the card olas and responds “El mar tiene olas.”

You can also play this game by placing the pile of  whole cards in the center and players can alternate drawing and asking the question.

Use the cards below to play the classic game Memory or Concentration and form affirmative and negative sentences. There are 26 pairs of cards, 52 total, so you will may want to play with a partial set.

To play, first choose the pairs you want to use. Next, lay the cards face down on the table in two separate groups – one group of whole cards and one group of  part cards.

Next, players turn over one card from each group to find two related words and create a logical sentence. If the pair matches, students say the sentence (La clase tiene estudiantes. La cara tiene ojos.) and keep the cards.

If the pair of cards does NOT have related words, students make a negative sentence (El carro no tiene semillas. El año no tiene olas), and return the cards face down to the correct groups.

The player who builds the most affirmative Spanish sentences wins the game.

Download the Part of the Whole printable cards for Spanish sentence building games and the game instructions.

Spanish Sentence Building Part of the Whole Cards with Text Only

You can create your own cards for Spanish sentence building games based on other model sentences or frames. Do you have other Spanish sentence building games you play with your students or your family? We would love to have you share your ideas in the comments. You can also follow the Spanish Playground Pinterest Boards for more games and activities.