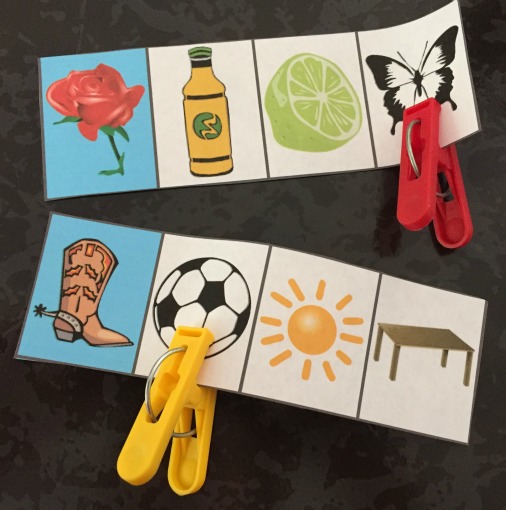 Rhyming is an important early literacy skill. To adults, rhyming seems simple, but it takes practice to learn to hear similar sounds at the end of words. For children, learning Spanish rhyming words is also a way to learn vocabulary as they match words to pictures.

I do lots of rhyming activities with preschoolers. I made these pattern and clothespin cards for a class a couple of weeks ago.

I like making patterns with kids learning Spanish because they say the words over and over. That repetition makes patterns excellent for practicing new vocabulary. If the patterns use rhyming words, kids hear the similar sounds too. The activity really helps children get the feel for rhyme.

There are 4 pattern strips and cards for preschoolers to use to copy the pattern.

Once kids have the idea of what rhyme sounds like in Spanish, we do activities where they choose a word that rhymes with another. First we match cards that rhyme, starting with only two pairs (four cards). Add more cards as it gets easier. You can use these printable rhyming cards to match pairs. There is also a set of printable Spanish rhyming words on Colorear y Aprender.

Clothespin cards are another activity for choosing a rhyming word from several choices. Kids say the word at the left and then say the three words to the right. They choose the word that rhymes and put a clothespin on it. Of course, kids could also color the square, but clothespins are fun and they can use the cards more than once.

These are the Spanish rhyming words on the clothespin cards:
pato – gato
fresa – mesa
mariposa – rosa
ratón – limón
pelota – bota (Use the word pelota for this activity. If you use balón, it will rhyme with ratón, avión, camión, and limón)
botella – estrella
sol – caracol
avión – camión

If you still feel like doing more with Spanish rhyming words, read and color these 4-line poems using color words.

Spanish Language and Culture from Miraflores
The Wanting Monster: Why I Let My Kid Write Extremely Long and Greedy Wish Lists