Mi lugar en el universo is an activity that works well for kindergarteners and early elementary grades. It is a simple printable mobile with circles that go from most specific (Soy yo.) and broaden to Éste es mi planeta. It teaches basic Spanish place and geography words and helps children begin to orient themselves on the planet.

The mobile has these place words: la casa, la escuela, la ciudad, el estado, el país, el continente, el planeta. I give the kids outlines of the Earth, North America, the United States and Wisconsin. They can draw or use photos to represent their city, school, house and themselves. Although we talk about the names la Tierra, América del Norte, and Estados Unidos, I did not include them on the printable because that is not what I am focusing on. You could certainly have kids write them in.

To make the mobile, kids make and cut out their place circles. I use colored paper to print the circles and the spiral, but it is not necessary. Then, we glue the spiral to the center of a paper plate. Have kids cut along the black line; they can just cut off the end. We attach the place circles to the spiral with tape. This is easiest to do if they hold up the spirals for each other to choose a place for the circles and tape them on.

You can also do this activity as a flip book. Just stack the circles, punch a hole at the top and tie the pages together. If you print it on cardstock, you can also use a brad and slide the circles to the side. 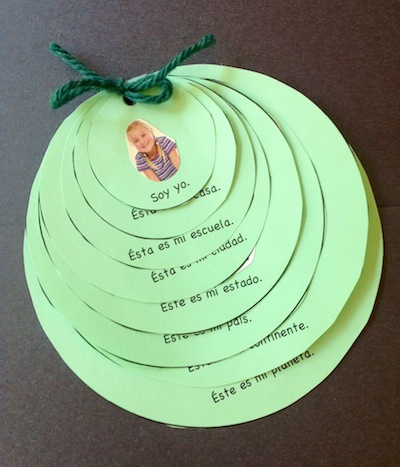 I included the outlines that I used for the Earth, North America, the United States and Wisconsin. I also added outlines of Minnesota, Illinois and California. If you print the outline of another state, size it to about 2.5 to 2.5 and it will fit in the Éste es mi estado circle. The public domain clipart is from Clickr.