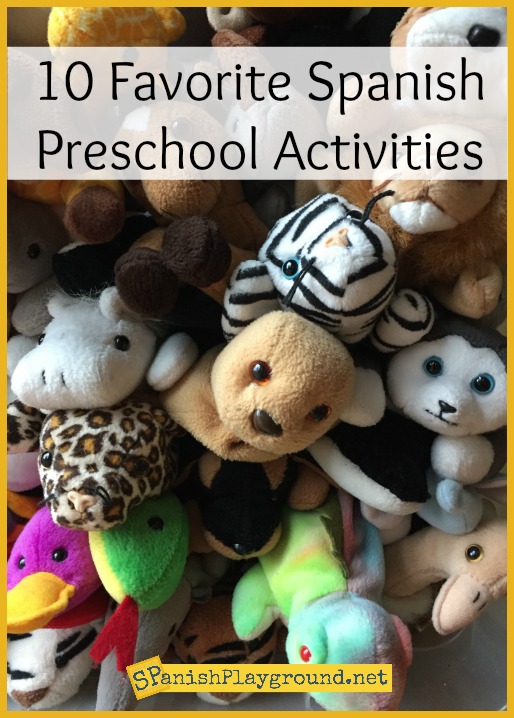 Teaching preschool Spanish is wonderful! Preschoolers are active, curious little people ready to play and learn. However, many teachers contact me with questions about how to teach this age group. It can be hard to know where to start, so I’m sharing some of my favorite Spanish preschool activities.

These are Spanish preschool activities that you can adapt to any theme. Of course, I do other theme-related activities too, including songs, games, and art. For examples, see these preschool Spanish mouse activities and read Tips for Using Themes for Spanish for more information.

My goal with these Spanish preschool activities is to build comprehension of useful vocabulary and help kids become comfortable producing the sounds of the language. Just as important, I want to instill confidence and a love of language learning.

I design my favorite preschool Spanish activities so students hear and understand lots of Spanish. In addition, these games are quick, and many of them are hands-on. Read more about the components of a preschool Spanish lesson.

My youngest students understand ¿Dónde está? after their first class, and I continually reinforce it with these Spanish preschool activities.

I tell the kids to close their eyes (but it doesn’t matter if they don’t). Then, I place an object somewhere in the room where everyone can see it. The object can be anything that fits our theme, such as a beanie-type animal, an apple, a mini-pumpkin, a paper flower, etc.  When the students open their eyes, I ask “¿Dónde está (el gato/la flor)?” They point to the object when they see it as I repeat the question several times. Then, I say “Sí, allí está el gato,” sweep in to pick it up and do it again. I use one object several times, then another.

If we are reviewing and the students know the vocabulary, I place three objects around the room at a time. Depending on the group, I also have students retrieve the objects and bring them to me as I ask “¿Dónde está el gato? ¿Me lo puedes traer?”

I use identical clothes, such as cloth napkins or dish towels, for this hiding game. Under one cloth, in my hand, I have a small object or a picture card. I mix them up behind my back and set them in front of me. Then I ask “¿Dónde está (el gato)?” A student lifts up one napkin. If she guesses wrong, she just lifts the other napkin and I say “Allí está en gato!” It all happens fast, so choosing “wrong” doesn’t matter. My students love this game. 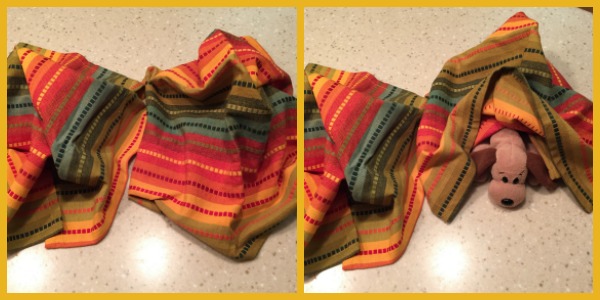 I use counters for this game, but any small object works.  I demonstrate how I hide one in my hand and then put my hands behind my back and transfer the object between hands. Then I put out both closed fists and ask “¿Dónde está el oso?”.  A student chooses and I open that hand. Again, if she guesses wrong and the hand is empty, she just points to the other hand and I say “Sí, allí está el gato.”

After I have modeled this game, students can play it with a partner. I give them both counters so they can play continuously. As they play, I keep saying “¿Dónde está el oso?” so even if students are not repeating the question, they are hearing it and guessing.

You can do any of these Spanish preschool activities to practice ¿Dónde está? and vocabulary from many different themes.

This is one of my favorite Spanish preschool activities to practice gracias, and kids think it is silly and fun. I give all the students a beanie-type animal. They stand facing each other and trade animals, more or less at the same time, over and over.  As they do, they say gracias, gracias, gracias each time. Once they get the hang of it, I say “más rápido” and they try to trade faster and keep saying gracias. I also do a version where the students freeze when I call out “¡de nada!” and start when I say “gracias” again.

As much as possible, I do Spanish preschool activities for new vocabulary with something students can hold. If possible, I use objects such as plastic or stuffed toys or paper figures, like the cats below. If necessary, I use picture cards. The cats are from Krokotak, and I use lots of their fun printable figures.

First, I show the object or picture and use the word in context repeatedly so that students have the opportunity to hear and understand it.

By the time we have done all the motions, they have associated the word with its meaning and their pronunciation is accurate.

Some of my preschool Spanish activities depend on dramatics to get in repetition of vocabulary and practice pronunciation. As much as possible, I create a small scenario so kids hear additional comprehensible language.

For example, if we are learning about arañas, I will put a toy or a paper spider on the table and mime that it is sleeping (finger to mouth to be quiet, hands beneath head turned to the side) as I say “Está durmiendo.” Then, I whisper “araña” and gesture that students should repeat. We say it softly together and I gesture for them to get louder and louder, as I say it more and more loudly. When they are saying it really loudly, the spider “wakes up” – in other words, I make it jump in the air and land on my shoulder. ¡La araña se despertó! This “waking up” works with any “living” creature.

For food, I do the same thing. I put object or picture on the table and stand away. I rub my tummy and say “Tengo hambre.”  I reach toward it saying, for example, manzana quietly. The idea is that I want the apple. Then, I whisper manzana and gesture for students to repeat with me. We say it softly together and I gesture for them to get louder and louder with me. When they are saying it really loudly, I pick up the apple and pretend to eat it.

I also place animals at a distance. We call the animal together, first softly and then louder and louder, until it “comes” to us. You can create any number of little scenarios like this.

You can also use expression, like happy and sad voices, for vocabulary and phrases. Show a picture of a happy face and sad face, or act them out very dramatically, until they know the words feliz and triste). You can say words in different voices by showing pictures and using phrases like “como un monstruo” and “como un ratón”.

I ask ¿Cuántos hay? several times during class and we count a lot. I count as I hand things out, and as I pick things up. I combine the question with a noun as much as possible: ¿Cuántos osos hay?

One of the easiest preschool Spanish activities is to count the students. You can touch them on the head as you all count together, or you can have them stand (or sit) if you like.

Another easy counting activity is to place beanies around the room, and ask kids to help you collect them. For example, you put out 8 beanies, and then choose 8 children to get them. Tell students they can only bring back one animal. Students can line the toys up on the table as they retrieve them and the group can count them together. You can do this twice for larger groups.

With these songs, students learn marcha, baila, corre, gira, camina, salta, etc. Of course, we learn one of these songs at a time! The first few times, I say the verbs and model the actions before the song. Then, they watch me and do the same actions as we listen and sing. They learn these fun verbs in no time!

This activity reinforces the action verbs in the movement songs I mentioned above, but the students are sitting down for this activity. I give them all beanies and we move the animals as I say the verbs. For example, I’ll say salta, and they make their animals jump. I say baila and our animals all dance.

I actually sing parts of some of the songs as we do this. For example, Marcha by Singalingo has lines like Camina, camina. Camina muy lento. Corre, corre, corre. Corre muy rápido. and Salta, salta, salta. Salta muy alto. I sing as we move the animal, and kids soon start to sing along. Once students know the verbs, I’ll ask them what action the animals should do and they will call out different actions.

I like Spanish preschool activities that I can use with lots of different vocabulary. This one is a game where students draw something out of a box or bag and say what it is. However, everything in the box represents the same 2 or 3 words, so I as they draw, I ask, for example, “¿Es un caballo o una vaca?”.

I have lots of toy animals, so I can put in 5 horses and 5 cows, or I use picture cards. All the horses do not have to be identical, in fact it is more interesting if they are different!  Of course, I am asking the same choice question over and over, and each time a child takes one out we say “¡Es un caballo!” or whatever.

I have students hold onto the picture card or object until everyone has a chance. Then I ask, “¿Dónde están los caballos?” or “¿Quién tiene un caballo?” and they hold them up. Afterward we count each of the animals. Again, I like this game because I can do it with any two words just by making picture cards.

This activity is always a hit, and I love the enthusiasm students put into calling out me gusta and no me gusta. I assemble objects in a bag and pull them out one at a time to show the class. Each time I ask “¿Te gusta o no te gusta?” and they answer chorally. Then I pass the object around the circle and ask again “¿Te gusta o no te gusta?”. They each answer “Me gusta.” or “No me gusta.” I also teach Me gusta mucho, depending on the group.

The key to this activity is to choose things that kids feel strongly about, and to use objects instead of pictures whenever possible. I use things like a toy horse, a toy kitten, an apple, an onion, a green pepper, mustard, cheese, a toy spider, a toy snake, a small bottle of milk, a carrot, etc.

I use coloring sheets as Spanish preschool activities to reinforce vocabulary. These are not art projects. I choose or make them to correspond to the language we are learning. They are not creative activities, and we don’t always color them during class. Rather, we point to the pictures as we talk about them. For example, with the coloring sheet below, I ask “¿Dónde está el gato? ¿Dónde está el perro?, ¿Dónde está el árbol?”. I also ask “¿Cuántas manzanas hay en el árbol?” and we count together. You can make a picture using clip art to support whatever vocabulary you are teaching. 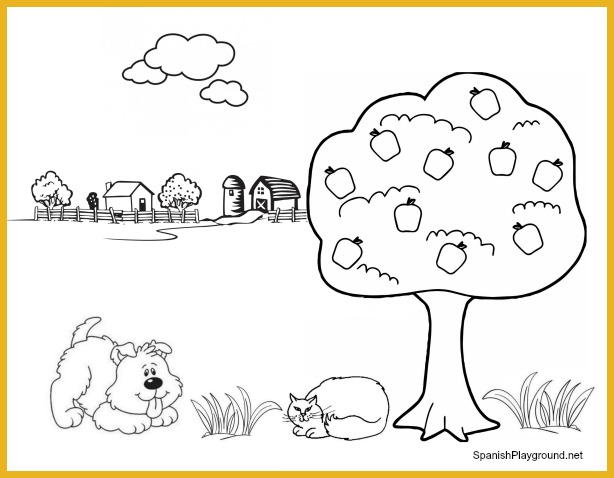