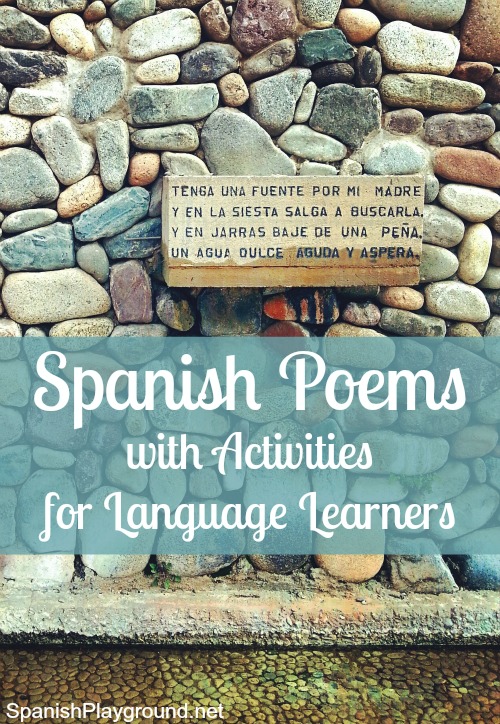 Poems in Spanish are a wonderful way for children to experience and learn language. Below you will find many Spanish poems for kids with activity suggestions.

Poems for language learners can be hard to find. Not all poems will be enjoyable or help them learn Spanish. The best poems for kids learning Spanish:

One of my favorite resources for Spanish poems for kids is the blog El Jardín de Douglas written by the Argentine poet Douglas Wright. Douglas Wright has generously given me permission to reproduce the full text of his poems on Spanish Playground. Many of the posts mentioned below include his poetry and activities for sharing them with kids. 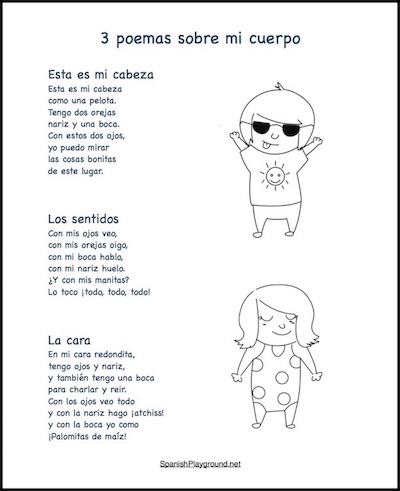 Spanish Color Words: Rhymes to Print and Color – Four-line poems about colors with pictures of familiar vocabulary. They can be printed and colored.

Poem in Your Pocket Spanish Printable – Four-line poems in the form of dialogs.

Spanish Poems for Kids about the Seasons

Spanish Thanksgiving Poems to Act Out – Two short poems written specifically to act out. They use very simple props and are terrific language learning.

Short Spanish Poems for Spring – Three short Spanish poems about spring with a printable activity for one of them.

Spanish Poems: Spring – Two Spanish poems for kids, one about rain and one about wind, with suggested activities.

Short Spanish Poems about Fall – Five poems about fall with imagery of leaves. Each poem is only four lines long.

Spanish Poems about Winter  – A collection of short Spanish poems for kids with lots of winter weather and clothing vocabulary. 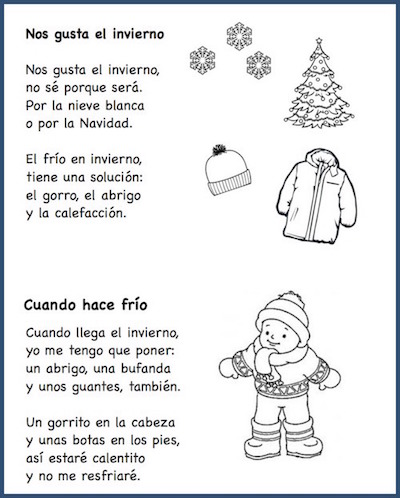 Spanish Poem for Kids: Bien Tomados de la Mano  – A pretty poem about friendship and suggestions for using it with kids

Hola, buen día, día: A poem by Douglas Wright  – A happy poem to greet the day and ideas for how to use the poem with Spanish learners

Spanish Poem for Children with Color & Nature Words – A poem with basic vocabulary. The post includes ideas for using the poem with children.

Spanish Poem for Children with Suggested Activities: Mi casa está viva – An excellent poem for talking houses. The post includes a printable activity working with the rhyming words in the poem.

Spanish Poem for Children: ¡Qué grande era todo! – This short poem is a great choice for beginning Spanish learners. It has familiar size and house vocabulary.

Poem by Douglas Wright for Children Learning Spanish – The poem Apurados, apurados and 10 activities to do with Spanish learners

Walking and Talking in Spanish: Two Rhymes to Combine with Movement – 2 short rhymes about walking

Pretty poem with 15 activities for children learning Spanish – This poem has natural world and 5 senses vocabulary. It works well with beginning learners.

Spanish Poem for Children: Rimando ando – A fun rhyming poem with easy vocabulary. It is about how animals move through different spaces. 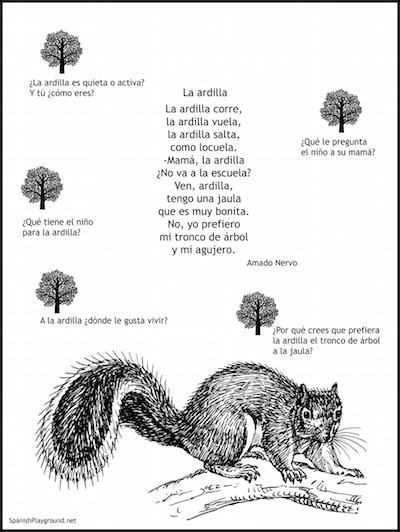 La ardilla – A poem by Amado Nervo with printable activities.

Poems for Children in Spanish: Edgar Allan Garcia and Sergio Andricaín in Cuatrogatos – 3 wonderful poems from Cuatrogatos, an online magazine dedicated to children’s literature in Spanish.

Spanish Prayers for Kids – Many of these short prayers are little poems. If religion is part of your home or school life, they are a rich language experience.

Collections of Spanish Poems for Kids

Try these Spanish Poems for Children: Three Resources with Poetry and Activities

We also love Spanish Poems for Kids: The Poetry Friday Anthology for Celebrations

The author write the Spanish Poems for Kids: All Bilingual Press especially for language learners, so they are very accessible.

For an online source, see Spanish Poems for Children: Nanitas. Francisco Rodríguez Gómez’s website dedicated to his Spanish poems for children. Rodríguez Gómez is a poet, musician and teacher from Cádiz, Spain.

Finally, Spanish Poetry for Elementary Students – A collection of poetry by Mariana Llanos. Intended for native speakers of Spanish, several of these poems are also appropriate for Spanish learners.