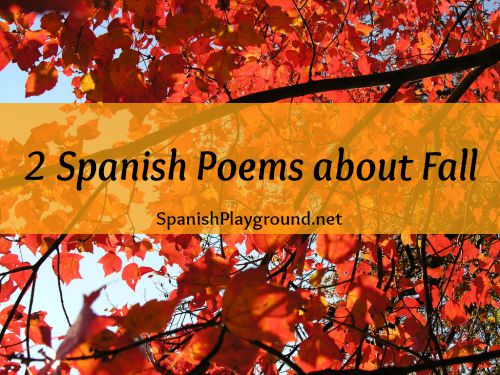 I love these two short Spanish poems about fall. They are perfect to use with Spanish language learners. The vocabulary is not complicated, and the rhythm helps children read them aloud and recite from memory. You can find more poems for children and information about sharing them with language learners on our poetry resource page Spanish Poems for Kids.

Douglas Wright,  a well-known author and illustrator from Argentina, wrote these two Spanish poems about fall. In addition to his books, he publishes poems on his blog, El jardín de Douglas. He generously gives me permission to share them here.

Follow the links in the titles below to the author’s blog and you will find the illustrations for these Spanish poems about fall.  Douglas Wright illustrates all of his poems. The images make the language easier for children to understand. The drawings clarify and reinforce the Spanish and help parents and teachers talk about the poems with kids learning Spanish.

The illustration for the poem La última hojita del árbol, establishes the setting for the poem. You see the narrator of the poem, the tree, and the last dangling leaf. You can talk about how the leaf might last one more day, but eventually it will fall. This is a perfect tie-in to another of Douglas Wright’s poems, El árbol quedó sin hojas.

Both of these poems about fall create strong mental images and combine them with clear, concise Spanish language. Children may well find similar images in their own world. The poems give them the language to describe them.

You may also be interested in reading Spanish Poem about Fall: Dramatic Play and Printable.