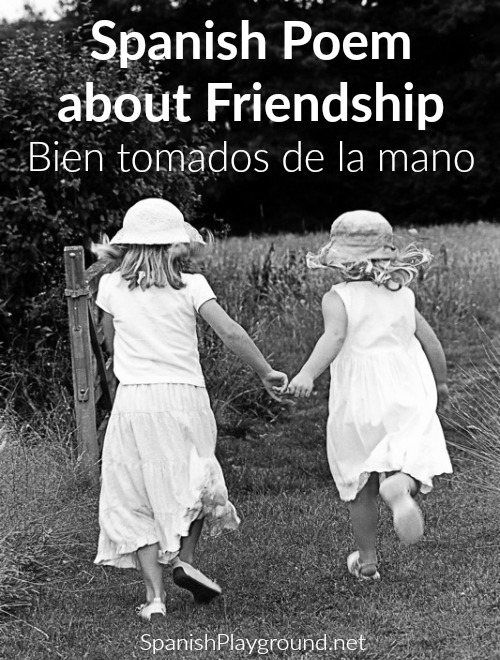 This Spanish poem for kids is by Douglas Wright of Argentina. I love his poetry because it is direct, conversational, and relevant to the lives of children.

Many of Douglas Wright’s poems are excellent for Spanish language learners because the vocabulary is simple, there is lots of repetition, and there is a significant cultural component in the descriptions of daily routines in Argentina. You can find more of his poetry on his blog El Jardín de Douglas.

You can also find more poems for children and information about sharing them with language learners on our poetry resource page Spanish Poems for Kids.

Using the Spanish Poem for Kids in Class

Talk about the illustration

Bien tomados de la mano is about how nice it is to go through life with a good friend. Douglas illustrates his work and the illustration that goes with the poem shows two friends holding hands. The image will help kids understand the literal meaning of the first stanzas. By the end of this Spanish poem, they will see that bien tomados de la mano, holding hands or hand in hand, is figurative as well as literal.

This poem is a great springboard for talking about friendship and the idea that even simple things are fun when shared with a friend. Caminar, mirar los árboles, and mirar el cielo serve as examples for kids to make their own list of things that they like to do with friends.

The poem also includes the structure Qué lindo que es caminar, where the second que is for emphasis. If children are writing their own sentences, they can choose one thing that they feel strongly about to express more emphatically by adding the second que. Beyond individual sentences, Bien tomados de la mano has a structure that can be adapted for students to write their own Spanish poems, or to create a poem as a class.

As always, many thanks to Douglas Wright for his permission to share his Spanish poetry for children with my readers!