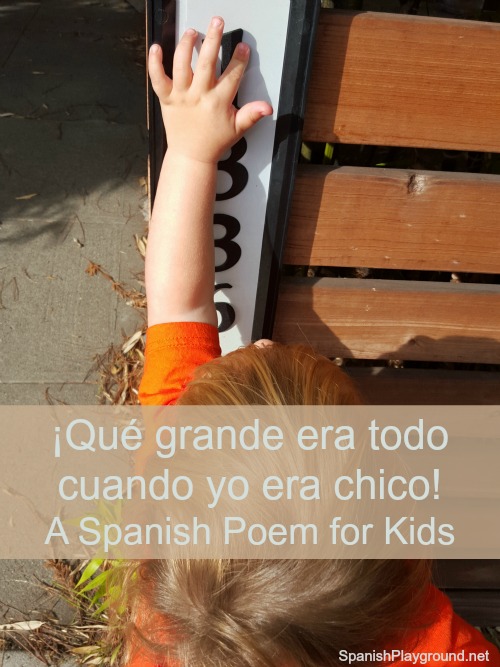 ¡Qué tan grande era todo cuando yo era chico! is a Spanish poem to share with children. It uses basic vocabulary that is appropriate for beginning Spanish language learners. This poem is about the sensation children have that the world around them is getting smaller as they grow. Many kids remember when they could not reach the counter or the faucet, for example.

The poem is by the well-known Argentine author and illustrator Douglas Wright. His books are hard to get in the United States, but he generously shares his work on his blog El jardín de Douglas and gives me permission to share it here.

The Spanish poem has lots of repetition of the phrase ¡Qué grande…! and is a great way to introduce or reinforce that useful structure with adjectives. The rhythm of the poem depends on the repetition of that line and the rhyming final lines of each stanza. Be sure to read the Spanish poem aloud so that children can hear the rhyme.

¡Qué tan grande era todo cuando yo era chico! uses ser in the first and third person singular of the imperfect (era). It is the only verb until the last line. The poem offers clear examples of how we use this verb in the imperfect for description in the past.

As always, many thanks to Douglas for permission to share his poetry with the readers of Spanish Playground.

You may also be interested in this post: Spanish Poems about Winter
Photo Credit: quinn.anya via Compfight cc