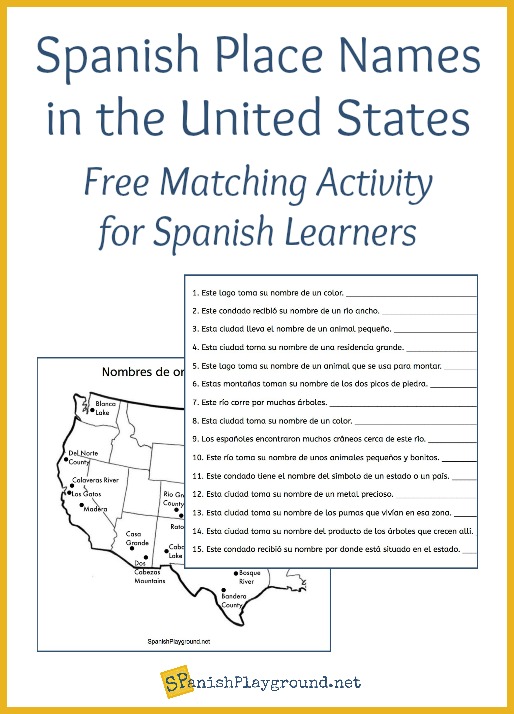 The United States has states, cities, rivers and mountains with names in Spanish. Looking at the meaning of Spanish place names in the United States is a fun way to connect with the Hispanic heritage of the country and practice language skills at the same time.

The Spaniards who came to the Americas during the colonial period named many cities and land forms. For example, most people recognize cities like Los Angeles and San Francisco as having Spanish names. However, across the nation Spanish speakers named cities, rivers and streets. The Hispanic heritage of the United States is all over Google maps!

Of course, not all Spanish place names are historical. Non-Spanish speakers also chose Spanish names for cities in different parts of the country. Surely, there are housing developers naming their new projects “Buena Vista” even as you read this, but this too speaks to the impact of Spanish on the nation.

I want my students to be aware of Spanish wherever they see it and to try to understand what they see and hear. So, I encourage them to ask about labels, signs, and songs on the radio.

In the past, they have asked about different Spanish place names in the United States, so I made this matching activity to practice reading and vocabulary. It’s also a great way to talk about the rich Hispanic heritage of the country.

Because much of the United States was originally colonized by Spain and later was part of Mexico, there are many Spanish place names in the western half of the country. I chose 15 places in the states of California, Arizona, New Mexico, Colorado, Texas and Missouri with Spanish names that language learners could understand.

September 25
For the Love of Spanish: Barefoot Books to Celebrate Hispanic Heritage Month

October 5
Mama Tortuga: The Story of Lempira from Honduras