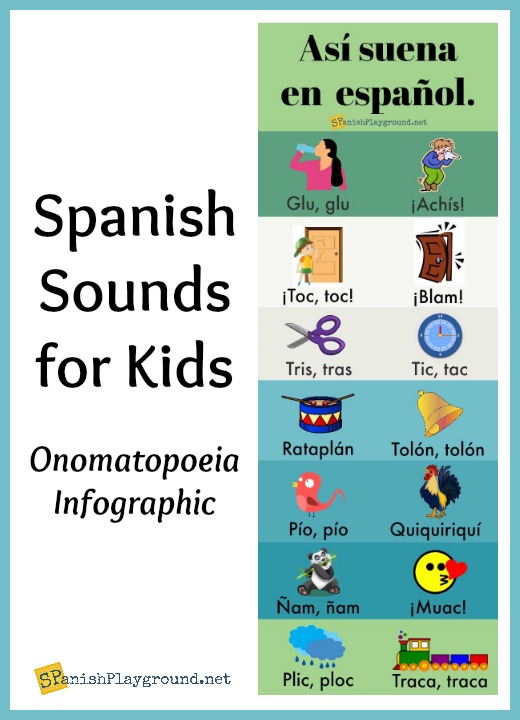 An onomatopoeia is a word that phonetically imitates the sound that it describes. In Spanish, the word is onomatopeya. Spanish onomatopoeia can be a fun way to practice vocabulary, as you talk about how the sounds of different animals, objects and actions are represented as we speak.

The easiest Spanish onomatopoeia for children to learn are basically sound effects. Animal sounds are always a hit, and there are many other sounds that you can introduce too.

As a language learning activity, Spanish sounds are particularly useful for practicing vowels and working with vocabulary related to the onomatopoeia.

If you are working with the Spanish vowels, you may want to introduce these sounds in addition to Spanish vowel songs, activities like this complete the vowel practice with clothes vocabulary, or this printable vowel domino game.

One way to practice Spanish onomatopoeia and related vocabulary by matching the sound to an image. You can also have students match the sound to a key word.

Another way to practice vocabulary related to Spanish onomatopoeia is to create a short dialog around the sound. One way to do this is to come up with reactions to hearing the sound. For example, if a student says glu, glu, another could respond Tienes mucha sed. ¡Tomaste mucha agua! If someone says tris, tras, they could respond ¿Por qué cortas ese papel? or ¡Son mis tijeras!. The idea is to create a context that uses related vocabulary in a logical way. There are an endless number of possibilities, so let students work in pairs to think of their responses. You can list key vocabulary you want to them to use.

I’ve put a few of my favorite Spanish onomatopoeia for kids on the image below. These are the sounds:

You can download a PDF of the Spanish onomatopoeia infographic here if you would like to print it.

Once students are familiar with the concept of Spanish onomatopoeia, you can introduce words that suggest a related sound. For example, the sound of the noun buho resembles the sound an owl makes. The verb susurrar sounds like a whisper and the verb aullar sounds like a howl.

What are your favorite Spanish onomatopoeia? Please share in the comments.

Learning about Water in Spanish
Food from Latin America: Roots of Culture