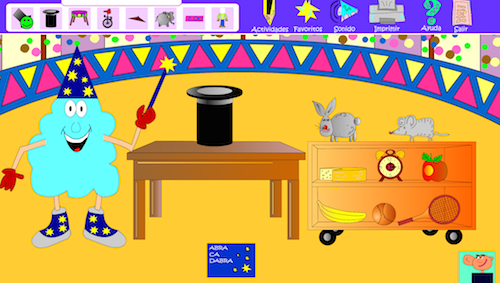 This Spanish online game, Un día en el circo, is from a set of activities called Diverland. The activities are part of Proyecto Ludos, online educational resources sponsored by the Spanish government.

If you do not want to do the seven games in order, there are icons in the toolbar and you can click on the one you want to play. You can hear and see the general instructions for each Spanish online game again by clicking on the question mark.

Except for the first game, the directions within an activity, indicating where players should put an object, are written and do not have audio. They are excellent activities for younger players if parents and teachers read the text.

These are the seven activities with descriptions and the Spanish vocabulary children practice as they play.

2. El mago
In this Spanish online game, kids are practicing dentro and fuera. They are given a magician’s hat on a table, a set of objects, and instructions to place the objects in or out of the hat.
Only the initial instructions for the game have audio. The directions about where to place the objects are just written, so parents and teachers have to read them for younger players. These are examples of the directions: Sitúa la manzana dentro y el plátano fuera; Mete el ratón dentro y el queso fuera.

3. El domador
In this game, kids are practicing encima and abajo. They place the lions on or under the correct pedestal. The directions about where to place the animals are written, so parents and teachers have to read them for younger players.

4. Los malabaristas
In this game, kids are practicing delante and detrás. They pick up objects and put them in the front or the back of a truck. When players click on an object, the word delante or detrás appears on the side of the truck telling them where to put it.

5. Los equilibristas chinos
In this Spanish online game, kids are practicing delante and detrás. They put acrobats on a pole in front of or behind a bicycle rider. When players click on the acrobat, the word delante or detrás appears on the screen telling them where to put it.

6. Los elefantes
In this game, kids are practicing cerca and lejos. They put the elephants close to or far from the spectator (The person playing the game is the spectator).

7. Zoo
In this Spanish online game, kids are practicing a la izquierda and a la derecha. They put the visitors to the zoo to the left and right of the animals.