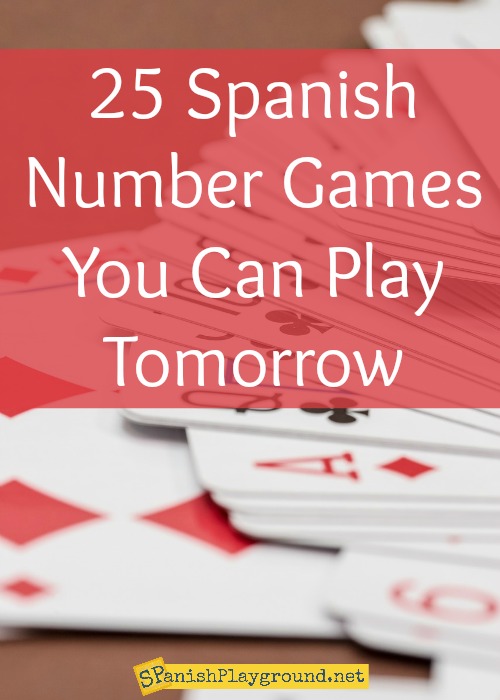 The effectiveness of Spanish number games depends on students hearing and saying the words. Students can conceptualize and manipulate numbers because they know them in English, but they need to connect them to the Spanish sounds. It is important to structure the language in Spanish number games so they are not playing mentally in English.

Below you will find Spanish number games for different ages and levels, from counting and number recognition to addition and multiplication. None of these activities require special materials, although you can print or buy Spanish word dice if you like. You can find these Spanish word dice on Amazon. 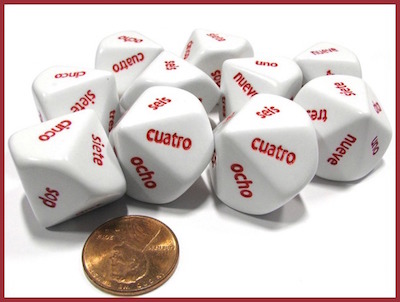 Scroll down for Spanish number games for older students.

This video is a great way to let kids hear the numbers 1-20 in Spanish and count along.

Mastering numbers in another language is much more than learning to count, but counting is a good place to start. If you are working with preschoolers or the early grades, try these Spanish number games once kids are familiar with the pronunciation.

Before we do other activities, I sing counting songs with my preschoolers. Singing they learn correct pronunciation and also the sequence of numbers to apply to counting objects and later to written numbers. Find 5 Spanish counting songs for preschoolers here.

Feed the monster – Put a monster face on a box or make one out of a plastic cup like my monsters below. Kids each have pompoms or paper balls. Roll dice or draw cards to feed that number to the monster. This also makes a good cooperative game where students work together to feed the monster. 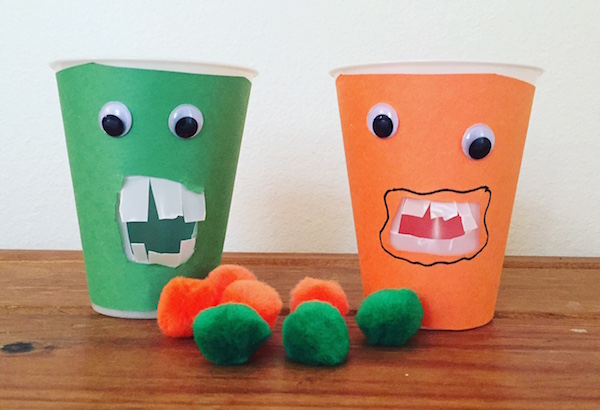 Board games – Play simple board games where you count the spaces and move game pieces. There are many printable games for preschoolers online. This Spanish greetings game is a good example. There are also printable board games to practice number recognition like this one from Life Over C’s.

Counting cards – Try these printable counting cards from Powerful Mothering. There are also versions in English and French.

Tira y tacha – Write the numbers 1-6 (or 1-12 if you are using 12-sided dice) on a card for each player. Players roll a die and cross out that number. The first person to cross out all the numbers wins.

Count by 5 (or another number) – Kids stand in a circle. Count around the circle and the child is number 5 sits down. The next child starts over with 1. The last child standing is the winner.

Number groups – Students move around a circle to music. When the music stops, the teacher calls out a number and students run to form groups of that number. This is a traditional game in Latin America called Pares y Nones. You can read a description and see a video in our list of 12 Traditional Spanish Games.

Number ordering – Give students 1 or more sets of number cards 0-9. Call out series of numbers and students put their cards in the order they hear.

Race to the board – Write numbers scattered on the board. Divide the class into teams and call out a number. Students race to be the first to circle the number.

Sticky-note search – Write numbers on sticky notes and hide them around the room. Students search for numbers, say them aloud when they find them and create a number line with the post-its. Have one or two students search at a time.

Again, students have to hear and say the words in these Spanish number games to make them effective. Structure the language you want students to use by providing sentence frames. The repetition of these sentences (changing the number of course) is an important part of language learning.

The frame you give students will depend on the game. For example, if students are rolling two dice and adding the number together, give them the frame (número) más (número) igual a (suma). Make sure they say the sentence every time they roll!

With a few groups of older students playing Spanish number games, I have made the rule that if they do not say the sentence before they place their maker they lose their turn.

Throw two – Students take turns throwing two dice and adding or subtracting the two numbers and coloring in the answer on the board. The one with the most answers wins. Here are two free Throw Two boards in Spanish from AulaPT.

Four in a row – Play a printable version of Four in a Row, similar to Connect Four, to practice Spanish numbers and math skills. You can make them like this one on Maths Blog, a Four in a Row with math problems on the board. I make mine where students roll two dice and add them together. The first person to have 4 in a row wins.

Download 2 of my Spanish Four in a Row addition games here. 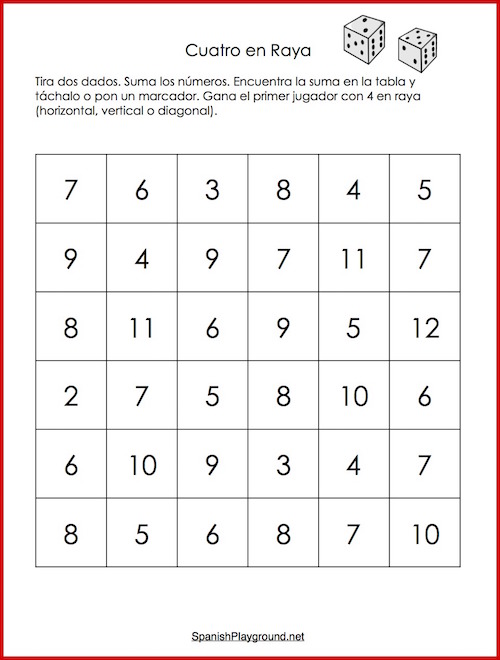 Note, the number of times a digit appears on my boards is based on the odds of rolling that number. Because there is only one roll that will give you a 2 and only one roll that will give you a 12, those numbers only appear once on my boards. My class time is short, and I do not want the game to take forever. I want someone to win! The Spanish number practice happens when they roll and say the two numbers and the sum, which they do each turn. My boards are designed so that the numbers they are likely to roll more often appear more often. If students finish quickly, they can always play again.

Roll to 100 (or to 50) – Whether you call it Race to 100 or Roll to 100, it’s an excellent way to practice numbers in Spanish. Use any hundreds chart as a game board. Students throw two dice, add them and move that many spaces. The first player to reach 100 wins.

First to answer – Each pair of students has a deck of cards with the face cards removed. Divide the cards between the players. Then, they both turn over a card at the same time. The first one to add the two numbers keeps the cards. With this game, because speed matters, students only say the answer in Spanish.

Beach ball toss – Write numbers on a beach ball and toss it. Students catch it and look at the number their thumb is touching. They add that number to the previous number and toss the ball to someone else.

Addition and subtraction with manipulatives – Using manipulatives gives you the opportunity to practice colors, shapes and other vocabulary as well as numbers. Take a look at this Counting and Addition Activity Tray from The Imagination Tree and adapt the ideas for the size of your group.

These classic games use numbers and can be played in any language. Again, you want to make sure kids are hearing and/or saying the numbers. You can also adapt many of these games to play with words, making them fun Spanish vocabulary games for different themes.

Bingo – You can play bingo using calling out numbers, or calling out simple math problems. The boards can have digits or number words. There are many free bingo card sets online and tools for making and printing your own.

Dominoes – Play the classic game, or try something new with these fun manipulatives. Upper Elementary Snapshots has a list of 10 Math Games to Play with Dominoes.

War – Each student turns over a card and the bigger number wins. Be sure students are saying the numbers aloud. I play that the student with the higher card has to say the numbers and if they forget, the other player gets the cards.

Uno – The commercial game Uno is great for colors and numbers. My students have to use a full sentence with tener (Tengo un tres rojo. No tengo una carta verde, No tengo un dos. etc) each time they play a card or draw. If they forget, they have to draw an extra card. 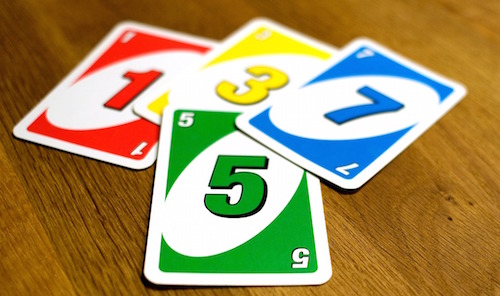 Tic-tac-toe – Put math problems in the spaces. Students read the problem aloud and solve it to put their marker in the space.

Solitaire – There are many classic solitaire games. Students name the number and color each time they move a card.

Spanish number games are a fun and effective way to learn important vocabulary. Choose games that would be easy for your students to play in English, so they can focus on absorbing language. After all, a review of basic math facts is always a good idea. Do you have favorite Spanish number games? Please share in the comments.