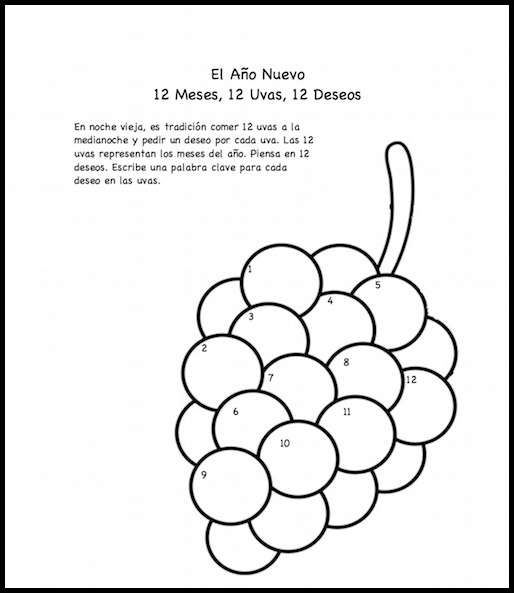 I am in Peru enjoying time with family and in just a few days we will be ringing in the New Year with friends, fireworks and a variety of New Years traditions. If you are celebrating the New Year with children learning Spanish, or talking about el Año Nuevo with a class, share the tradition of eating twelve grapes at midnight, just as the New Year begins. This Spanish New Year custom started in Spain and has spread to many Latin American countries.

This short video about New Year’s in Spanish introduces the tradition of eating 12 grapes and other customs to ring in the New Year. It’s a great addition to a New Year’s lesson or celebration.

The twelve grapes represent the twelve months of the year. As the clock strikes midnight, you eat the grapes, making a wish for each one. The idea is to eat them all before the clock stops striking. Most of us do not have clocks with bells, so we just eat them one after the other, as quickly as we can.

Making wishes for the New Year can be a good language activity for children. They can think about what they would like for themselves, their family, their community and the world. For beginning language learners, you can provide a simple sentence structure using querer or desear: Quiero paz para el mundo. Deseo buena salud para mi familia. Quiero buenas notas en mis clases.

Children can use this printable activity to record their New Year’s wishes in Spanish. They write a key word in each grape. The activity can also be good speaking practice if kids share a few deseos with their family or friends. The printable provides support and makes the speaking activity easier and less intimidating.

This coloring page from conmishijos.com shows two children ready to eat their grapes at midnight. It is a good introduction to the this Spanish New Year tradition.

You may also be interested in this post: Spanish New Year Resolutions for Kids from the American Academy of Pediatrics