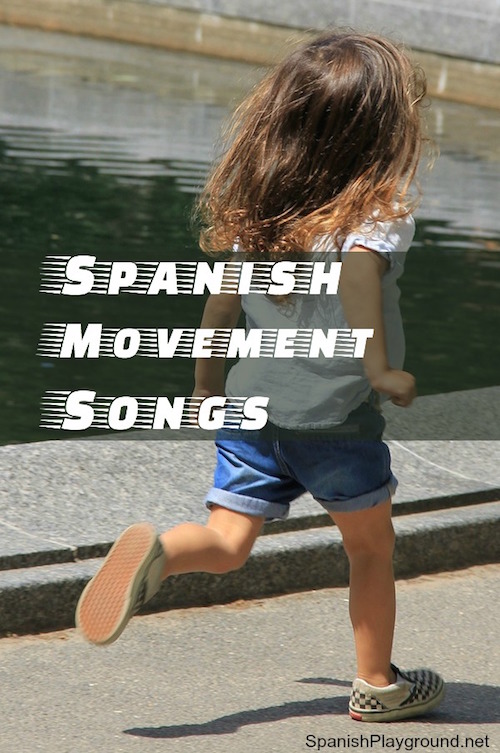 Music, movement and language are a winning combination. Given that, it makes sense for kids to learn verbs like saltar, correr, bailar, comer, dormir, and girar by moving as they sing the words. These Spanish movement songs get children singing, moving and learning!

Check out more of our favorite Spanish songs for kids grouped by theme.

I do not use this video with kids, but you can use it to listen, and purchase the song on iTunes or Amazon.

This is one of my go-to Spanish movement songs for preschoolers. It is by Singalingo, and there is a break midway if you want to start with fewer verbs. Because this song is all command forms, it also works well to sing as students move stuffies or beanie-type toys. I don’t play the song for that activity. I simply sing the tune and the verbs and they move their animals.

Again, I don’t use the video with kids, but you can use it to listen and purchase the song on iTunes.

There are many Spanish movement songs about animals, and others add adverbs like fast and slow, or nouns for children to act out. These three are good examples, and I have used all of them with preschoolers and the early grades. You’ll find other Spanish movement songs that teach first verbs and a little more language.

The song is about a hen who behaves properly until she hears the song and then she runs, jumps, spins and flies. It is by Elizabeth Carmona of Chile, produced for A Tiempo Preescolar, and it is great fun. Kids love it because each time it repeats, it goes faster and faster.

You can listen to this song and see the video from A Tiempo Preescolar below. The song is available to download on Elizabeth Carmona’s CD Uno, dos, tres a jugar on iTunes.

Susy Dorn writes and sings some of my favorite songs for my youngest students. This song is a good contrast to the others because it is relatively calm, as kids do a series of actions con el oso and end up giving the bear a hug. It is a nice wind-down song. You can hear the song below and purchase it from Amazon or  iTunes.

Jorge Lan’s song Lento y rápido teaches verbs like caminar, correr, brincar, aplaudir and patear. It is to the tune of Row, Row, Row Your Boat and, as you might guess, involves doing things slowly and quickly.  You can listen to the song below and purchase it on Amazon or iTunes