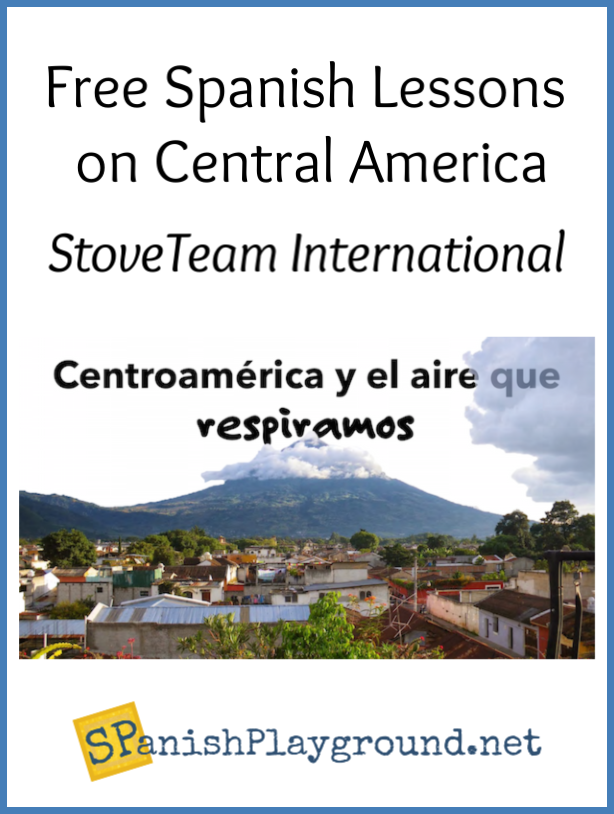 Forest Resener is the Communications and Operations Director for StoveTeam International, a nonprofit organization that has provided over 76,300 improved cookstoves in Central America. He created four free online lessons about Central America for Spanish levels 2 and up. He writes about the unit below.

When I created these Spanish lessons, my intention was to raise awareness of issues faced by people in Central America, including the problems caused by open cooking fires. Our organization StoveTeam International works to prevent the damage cooking fires cause. However, the unit has become something bigger. It’s helping students become global citizens, raising cultural awareness, and even helping students come together to take action and make a difference.

Around the world, 3 billion people still cook over open fires, usually indoors, and the consequences are dire for women and children inhaling smoke all day long. Despite the extent of this problem, people in other countries often hear little about it. So, StoveTeam has set out to raise awareness.

These Spanish lessons use photos and stories collected by StoveTeam during our work in Central America, specifically in Guatemala, El Salvador, Honduras, and Nicaragua. The lessons contain a mix of beautiful photos, interactive exercises, videos, class discussions, quizzes and more.

The first lesson explores Central America and begins to discuss what life is like for many families living with few resources. Students learn new vocabulary like “fuego abierto”, watch a video, take a quiz, and pair up for a creative exercise.

The second lesson dives into specific problems related to the worldwide issue of open-fire cooking, which kills over 4 million people each year, mostly women and children. The lesson explores how StoveTeam has been able to help over half a million people, and what that means for these families. During this lesson, classes have the option to video chat with Alex Eaton, StoveTeam’s staff person living full time in Guatemala. We’d love to answer your class’s questions, so contact us for more info.

The third lesson shares several true stories from people whose lives have been changed by receiving an improved cookstove, or finding a job building stoves in their community.

Lesson Four, called “Tomar Acción”, shows students that StoveTeam’s work is only possible thanks to the generosity of people who take action. The lesson lists several examples of campaigns that have raised awareness and money to provide stoves, including an 8th grade Spanish class that recently raised over $1,200!

Using the Spanish Lessons on Central America in Class

I’d love to hear from anyone thinking about using this unit in their class. This is a new venture so I’m open to any thoughts you might have, and I’m happy to answer any questions. The unit “Centroamérica y el aire que respiramos” is available free on StoveTeam’s website.

During my frequent trips to Nicaragua over the course of several years, I saw the damage caused by open cooking fires. I believe the Spanish lessons about Central America from StoveTeam International could be an effective way to learn more about the region, both its tremendous strengths and the challenges it faces.

I was in Nicaragua doing education workshops. Read about a few activities from that work in Spanish Question Game: El Repollo and Simple Spanish Word Games: Nicaragua.