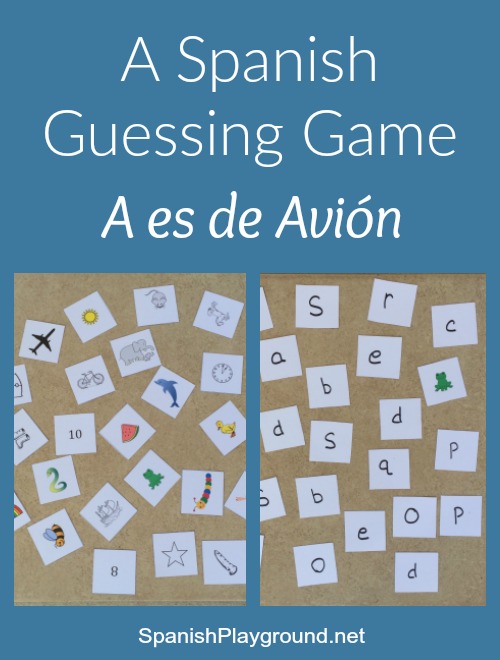 This Spanish guessing game teaches letter sounds, vocabulary and pronunciation. The idea for the game came out of moment of sheer silliness. When I am in Mexico, I help children at an orphanage with their homework. Kids often have to do a plana, or copy a letter or a sentence for a whole page. (Plana is the side of a page. You can find a discussion of the traditional exercise and term plana on Word Reference.)

I was working with a 5-year-old who had to hacer una plana of the letter l. In an effort to make the task more interesting and meaningful, I started to give her words that started with l each time she wrote the letter. It went something like this:

As you can imagine, the león had run away, but came back. Soon my playmate was writing an l and saying ¡Adivina!, which meant list words that start with l until you hit on one I like. I listed words, until she finished the plana. Then, I went home and applied the idea to this simple game.

I call this Spanish guessing game A de avión. Players look at a letter on the back of a card. The letter is the first letter of the picture on the card. Players guess what word the letter represents.

If they are correct, they keep the card. If not, they return the card to the table. Depending on the age of the players, they can rearrange the cards as they return it.

You can find lots of printable picture cards on Spanish Playground.

This set of alphabet picture cards has 3 pictures for each letter and works well for this Spanish guessing game.

If you’re not sure of how to say the letters in Spanish, this video from TakeLessons is a useful reference.

Adapt this Spanish guessing game according to ages and levels. Let kids make new rules and make the simple game their own. Most important, have fun!

You may also be interested in this printable game to teach animals, places and verbs. It is based on Go Fish.