5 Spanish Goodbye Songs for the End of Class 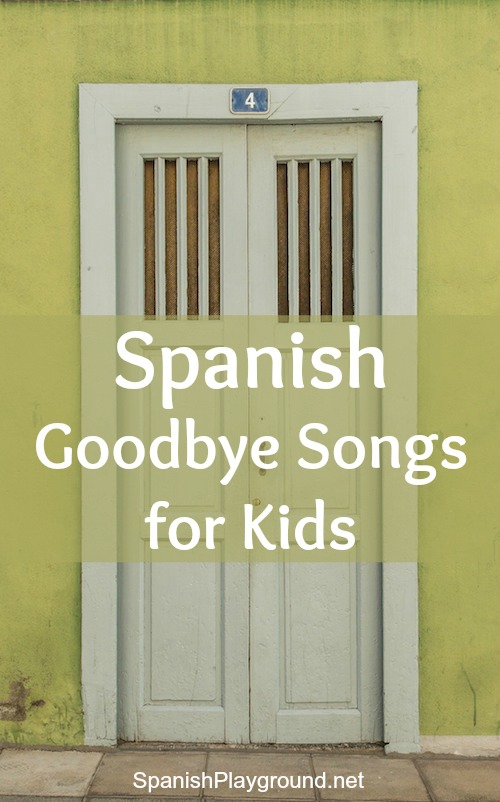 Music is one of the best ways to help kids transition from one activity to the next. So, I use good-bye songs to help them get ready to go, or transition to whatever is happening after our class. I have used these 5 favorite Spanish goodbye songs with kids of different ages and levels.

I also teach songs for other transitions. For example, I sing Spanish greeting songs to get kids engaged when class begins, and use songs for washing hands, picking up and other classroom routines. I have found that these Spanish goodbye songs pull everyone together, end class on a positive note, and send kids off singing.

You can also make up your own goodbye song to a familiar tune, especially if you want something simple. In my first preschool classes we sing “Adiós mis amigos, adiós” to the tune of If You’re Happy and You Know It. You can find other easy Spanish songs to familiar tunes here.

Check out more of our favorite Spanish songs for kids grouped by theme!

This is one of the first Spanish goodbye songs my students learn. I like it because it combines various ways to say goodbye – something that we do all the time when we are speaking. Once kids know the song, we practice the different good-byes individually too. They love choosing how they want to say goodbye, even though they are just beginning to learn Spanish! You can hear the song below and buy it on Amazon or iTunes.

This is another song that works well with beginners. It is to the tune of Are you sleeping?. One of the reasons I like it is because it is call and response, so it is easy to learn. I also like that it teaches the very common phrase “Ya me voy.” You can listen to José-Luis Orozco sing the song in the video below. He sings each phrase and then leaves time for kids to sing after him. The song is in both English and Spanish, but you can teach only the Spanish, which comes first. You can buy Adiós amigos on Amazon or iTunes

This song has the common goodbye phrase, hasta pronto. It is short, which is also something I like since we are wrapping up and kids need to move on to the next activity. You can hear the song below and purchase it on Amazon or  iTunes. The words are:
Hasta pronto mis amigos
Nos veremos otro día
Todo juntos volveremos a cantar con alegría.

I also like this song from Whistlefritz and Jorge Anaya. It uses adiós, hasta mañana, and es hora de…, a structure I teach early in my classes. You can hear the song below and purchase Adiós on Amazon and iTunes. The words are:

Adiós mis amigos by Spanish Together

The last of my Spanish goodbye songs for beginners is by Spanish Together. The words are very simple (Adiós, mis amigos). I always do a clapping rhythm or actions to this song and incorporate waving goodbye. You can buy Adiós mis amigos on Amazon or iTunes.