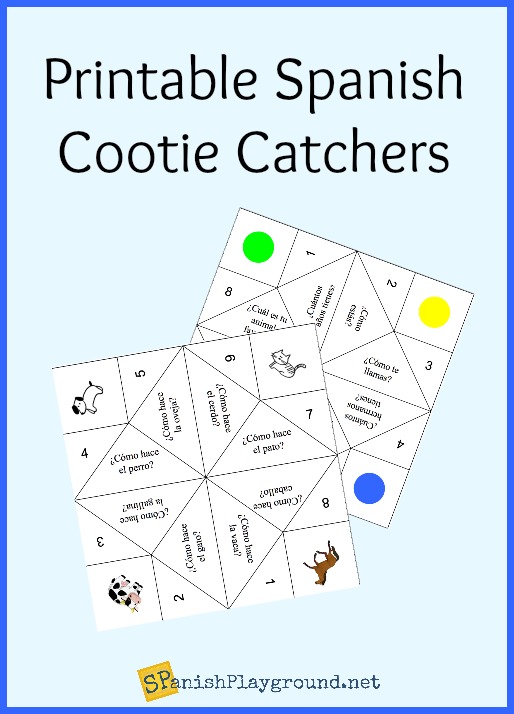 This Spanish game is a comecocos or a sacapiojos. In English, it is called a cootie-catcher, a chatterbox or a fortune teller. A Spanish cootie catcher is an excellent language activity and it can be adapted in lots of different ways to use with Spanish language learners.

The Spanish cootie catcher or fortune teller involves folding paper to make a toy that fits over your fingers and opens and closes. A friend chooses a series of pictures or words to arrive at the answer to a question. Comecocos is also the Spanish name for the 80s video game Pac-man, so if you want to search for this paper game, search comecocos de papel.

If you are not familiar with the paper fortune teller or cootie-catchers game, you can get an idea of how it works from this video of a cootie catchers game.

How to Use A Spanish Cootie Catcher

Traditionally, a comecocos is a kind of fortune-teller, with the final answer being a prediction. For language learners, you can make the Spanish cootie catcher so kids arrive at a question to answer, an action to do, an adjective that describes them, their favorite food, or other vocabulary that you want to practice.

When I use a comecocos with Spanish language learners, instead of having kids spell words, I have them say the words in syllables and usually as part of a phrase. For example, if the first choice is a color, and the friend chooses rojo, the child with the comecocos opens and closes it twice, as she says aloud ro-jo, or for each syllable as she says the phrase El color es rojo. Kids like the phrases because they get to open and close the Spanish cootie catcher more. You can use phrases like El número es… and El animal es…, depending on the comecocos.

With any comecocos, you will want to be sure the player with the toy knows how to ask the other player which color,  number or animal she chooses. Teach the question ¿Cuál quieres? or ¿Cuál escojes? if the kids do not know it. They can also say Escoje uno (Choose one.).

Here are a few of my Spanish fortune tellers to print and use with Spanish language learners. You can easily make your own by writing in words, adding drawings and using stickers. I have included a blank template for a paper forture teller or comecocos.

Spanish game – Los animales: A comecocos with numbers and animals. The final choice reveals a question about what sound an animal makes: ¿Cómo hace un perro?  This is a simple way for kids to practice animal vocabulary.

Spanish game – Preguntas: A comecocos with colors and numbers. The final choice reveals a personal information question to answer, such as ¿Cuántos hermanos tienes?

Spanish game – ¿Cómo eres?: A comecocos with colors and numbers. The final choice reveals an adjective that describes the player such as paciente, fuerte, amable.

Spanish game – La Navidad: A comecocos with Christmas vocabulary and numbers. The final choice reveals a picture of what the player will get for Christmas.

A blank comecocos. Write or draw whatever you like. Stickers work well too.

How to Fold The Spanish Cootie Catcher

1. Cut out the Spanish cootie catcher.

3. Open the comecocos completely, place the printed side down on the table, and fold each corner into the center (the point of the corner will touch the middle). You will have a square.

4. Flip over the comecocos (the corners you just folded in will be against the table). Again fold in each corner so the point touches the center.

5. Flip over again and fold in half to crease, unfold and then fold in half the other way to crease. Unfold. You should end up with a square with little pockets at each corner.

– Instructions for folding a comecocos.

– Spanish instructions for making this game.

– Instructions and additional game ideas. There are a few printable patterns, one with only shapes and colors that would work in Spanish.

– Spanish video showing how to fold this game. There are lots of videos in English on YouTube if you search “cootie-catcher”.

Do you use comecocos in your class? Share your experiences and ideas in comments!